Stressing out about the network | Light Reading

05 Nov Stressing out about the network | Light Reading

Posted at 04:32h in by fiberguide 0 Comments

We have been stressing out about a lot of things in 2020. A lot of things. Our health, the health and safety of our loved ones, whether to invite back the house cleaners or get the kids to vacuum (good luck with that) and what is happening to the economy and our 401k. That is just the tip of the iceberg in terms of stressors. More recently, the conversation with friends/family (over Zoom), colleagues (over email) or neighbors (via our Facebook group) has turned to the network. Some, a few, know how truly remarkable network performance has been during the COVID-19 pandemic. Almost all are now stressing about their home network. Many have gone from an empty house and zero network traffic during the day to parents working from home and frequently on Zoom meetings (or Teams, BlueJeans, Webex, etc.). The kids are also at home and on Zoom calls with their classrooms, FaceTiming with friends or taking their own stresses out in MMOGs.

How many conversations have you had lately with your social circle regarding broadband service? Complaints about video conferencing quality are growing. Everyone wants to boost their Wi-Fi signal to every nook and cranny in the house (and I can add “Wi-Fi extender” to the list of markets I have missed). The pandemic has hammered home to everyone the fact that broadband connectivity is a basic need. We are awakening to the always-on world of the 21st century. And not just always-on always-on in 4K live streaming video.

A portent of things to come

This is stressing out the carriers. Yes, 2020 is an anomaly that we will all be glad to put behind us, but from a networking perspective, carriers know it is a portent of thing to come. And those things are coming fast. The changes in traffic volume, traffic mix and traffic patterns that are an exception today will be the norm in two years. Overall network traffic is doubling every three years. 5G will demand a factor of three or five or seven more base stations. 5G subscriptions have grown from 15 million in 2019 to over 230 million in 2020 and are on course to reach over 3 billion in 2025. The Internet of Things (IoT) is here the number of IoT contracts awarded to carriers has grown from under 10 worldwide in 2009 to 1,168 as of 1Q20. The number of connected cars is expected to grow from 59 million in 2016 to an estimated 308 million worldwide in 2022. Ultra-low latency use cases are found, today, across vertical industries healthcare, entertainment, transportation, manufacturing, energy and industrial automation.

How are the carriers adapting to address these network stressors? As the next decade of network architectures and development approaches, “simplify” is the guiding principle whether through virtualization, automation, machine learning, open source, commercial off-the-shelf (COTS), proprietary systems or all of the above. Carriers are seeing a cloud-native network as the goal, but they are not sure of the path that will provide the greatest ROI. Carriers such as India’s Reliance Jio and Telefnica are innovating on a foundation of cloud-native development. However, Japan’s Rakuten Mobile secured its front-runner position in cloud-native with a fully virtualized, automated and software-centric network, initially as an LTE network, with 5G launched five months later. According to Rakuten Mobile, the level of virtualization and automation it has achieved means its cost to deploy 5G is 40% less in capex and 30% less in opex compared to the deployment costs of traditional telecom operators. 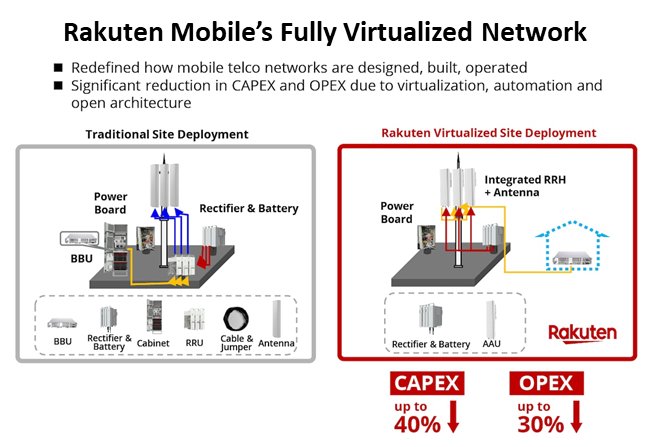 Rakuten Mobile and its partners (notably QCT and Intel) worked together to design its infrastructure platforms that utilize the 2nd Generation Intel technologies for agility, flexibility and scalability. The data centers at the heart of Rakuten Mobile’s fully virtualized network are equipped with QCT’s servers that use Intel Xeon Scalable processors and field-programmable gate arrays (FPGAs) to achieve accelerated performance. This underlying foundation resulted in a platform that not only scales, but also enables continued innovation in terms of service creation. By standardizing on a single, custom-built hardware platform, Rakuten Mobile reduced the complexity of its network, simplified the virtual network function (VNF) integration process and improved its ability to automate, manage and troubleshoot the environment.

Telco operators normally maintain infrastructure with hundreds of different configurations. Rakuten Mobile uses less than 10 configurations in total and only 4 configurations for network edge sites. Yes, it is a greenfield operator without the stress that comes with supporting decades of technology. But for those lying awake at night working through the equation of petabytes more traffic, millions more cell sites, billions more connected devices, a scarcity of trained personnel and the necessity for zero-touch, lights-out data centers, the prospect of simplifying the network is a pretty good stress reducer.

This blog is sponsored by QCT.