Synopsis: A Recipe for Finding Fractons

A new theory proposes an experimental approach to spotting fractons.

Fractons—unlike most detected and predicted particles—are immobile. These topological excitations of exotic quantum materials are interesting for quantum computing, with theory predicting that they could store large amounts of information extremely robustly. But researchers have yet to observe fractons experimentally. Now, Han Yan at Okinawa Institute of Science, Japan, and colleagues propose a way to find these elusive quasiparticles in the lab.

A barrier to observing fractons is the complexity of the models that predict them. This complexity makes it hard for researchers to find a way from theory to experiment, Yan says. He and his colleagues wanted to bridge that gap.

For their study, the team exploit an exotic form of electromagnetic theory called rank-2 U(1) gauge theory, which is known to host fractons. The team show that this exotic theory can be accommodated by the spins in a magnet with a specific crystal structure—a breathing pyrochlore lattice. Their calculations indicate that polarized neutron scattering experiments in this material should pick up a signal containing “fourfold pinch points,” a pattern resembling the wings of a butterfly. If such a signal is spotted, it would unambiguously confirm the existence of fractons, the team say, although they note that the evidence would be indirect.

But experimentalists still need to make real the model that the team study. Fortunately, materials already exist with features very close to those described by the theory. One such material is the breathing pyrochlore magnet

. Tweaking the material’s chemical composition or applying pressure could be enough to induce the required properties.

Katherine Wright is a Senior Editor for Physics. 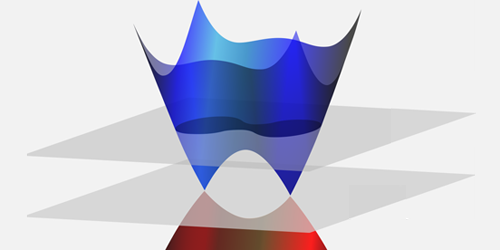