Just a few weeks after it officially closed its merger with Sprint, T-Mobile said it had begun commercially deploying some of Sprint’s vast 2.5GHz spectrum holdings. As a result, the operator said that within the next few weeks, it expects to launch 5G working in lowband, midband and highband spectrum in New York City. 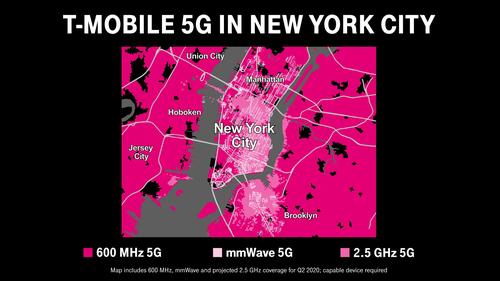 T-Mobile said it will soon offer 5G across a wide range of spectrum bands in NYC.
Click here for a larger version of this image.
(Source: T-Mobile)

That development would represent the fulfillment of a promise made by T-Mobile’s network chief more than two years ago. At the 2018 MWC Barcelona trade show in Spain, T-Mobile’s Neville Ray publicly laid out T-Mobile’s “layer cake” strategy for 5G. He explained that a true 5G network would use highband, millimeter wave (mmWave) spectrum in dense urban areas, midband spectrum in broad metropolitan areas, and lowband spectrum for nationwide coverage. 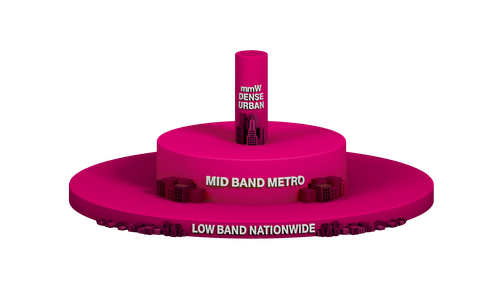 T-Mobile has long promised a “layer cake” approach to 5G spectrum.
Click here for a larger version of this image.
(Source: T-Mobile)

That “layer cake” strategy is so core to T-Mobile’s 5G efforts that the company actually baked a real, three-layer cake to illustrate its plans. (To be clear, other operators have voiced plans to deploy 5G in a similar way, just with less delicious clarity.)

That layered 5G network is exactly what T-Mobile said it would launch in NYC in the coming weeks. The only catch? As noted by PCMag, the operator admitted it doesn’t yet sell any phones that can support 5G in low-, mid- and highband spectrum. Those phones, the publication reported, won’t be available until next year when Qualcomm’s X60 smartphone modem hits the market. (Broad support for 5G spectrum bands has dogged most of the market’s early 5G phones.)

Nonetheless, T-Mobile’s deployment of a full-blown 5G “layer cake” in NYC essentially marks the culmination of the operator’s struggles toward 5G over the past two years. Although T-Mobile purchased $8 billion worth of 600MHz lowband spectrum in the FCC’s 2017 auction, and has been adding to its mmWave spectrum holdings in subsequent FCC spectrum auctions, the company had lacked a midband spectrum play. And that’s why, just months after Ray outlined the operator’s 5G strategy at MWC in 2018, T-Mobile announced it would acquire Sprint, which owns around 160MHz of prime, mostly unused 2.5GHz midband spectrum across much of the country.

With the close of that long-gestating merger earlier this month, T-Mobile now commands roughly double the amount of low- and midband spectrum that Verizon and AT&T do.

A deployment in fits and starts
However, T-Mobile’s “layer cake” 5G deployment in NYC is just the first step in a long process for the operator. T-Mobile has said it will spend more than $40 billion over the next three years to merge its network with Sprint’s network, an effort that will include the installation of thousands of new macro towers and small cells. After all, there’s plenty of unnecessary redundancy and overlap between T-Mobile’s existing network and Sprint’s existing network and Sprint’s own 5G efforts in 2.5GHz only reached a total of nine cities. T-Mobile’s goal is to roll out 5G layer cakes all over the country.

Doing so will be difficult. “It will take time to make that transition, even for a company that has materially outperformed expectations with its rapid deployment of 600MHz spectrum,” wrote the Wall Street analysts at Lightshed in a recent post. “While we are cautious about how many markets T-Mobile can launch with 2.5GHz in 2020, we are confident that the company can establish a competitive network advantage with this spectrum in 2021.”

T-Mobile, for its part, said its midband 5G network is now live in Philadelphia and that it will launch lowband 5G in Detroit, St. Louis and Columbus, Ohio. The company also said its Sprint customers can now roam onto its T-Mobile 600MHz LTE network.

According to PCMag, T-Mobile is not providing any kind of 5G deployment timeline unlike Verizon, which has promised to light up another 30 cities with its own mmWave 5G network this year. That’s not a surprise considering there are indications that the spread of COVID-19 has affected everything from cell tower technicians to the city officials who must approve cell site permits. That undoubtedly makes setting and reaching deployment timelines difficult at best, if not impossible.

Complex spectrum and technology strategies
Importantly, it appears T-Mobile has recently embarked on an interim solution to its midband deployment headache the company is looking to lease 600MHz lowband spectrum from Columbia Capital for three years, a move that essentially will extend its move to temporarily borrow that spectrum to handle COVID-19 traffic spikes.

Such spectrum could significantly improve the performance of T-Mobile’s lowband 600MHz 5G network after all, the more spectrum an operator can deploy into its network, the more customers it can support and the faster speeds it can provide.

Thus, with Columbia’s 600MHz spectrum, T-Mobile can offer faster lowband 5G speeds while it deploys 5G into the 2.5GHz midband spectrum it acquired from Sprint.

However, the relationship between spectrum and network performance could also dog the perception of T-Mobile’s 5G network. For example, T-Mobile’s 5G network clocked by far the slowest speeds of all operators in Los Angeles 24Mbit/s compared with 255Mbit/s from Verizon in RootMetrics’ recent tests in the city. But that’s because T-Mobile was only using lowband 5G in the city. The operator has promised that it will be able to raise those speeds to up to 600Mbit/s via the deployment of Sprint’s midband spectrum.

And with highband, mmWave spectrum, those speeds could well cross the 1Gbit/s threshhold, based on the performance of Verizon’s own 5G network in mmWave spectrum.

While that development is really only interesting to hardcore networking engineeres, the result almost doubles download speeds for users. It also helps to highlight the vast and complex undertaking T-Mobile is embarking on, as well as the numerous levers the operator can pull over the coming months and years to improve its 5G network performance.