Sometimes it looks as if Telecom Italia is being carved up and sold off like an ancient ruin whose parts still have intrinsic value.

Not all of Telecom Italia, that is, but the important infrastructure parts the bits that distinguish it from service providers without their own physical assets.

The Italian telecom incumbent has already done the unthinkable, as far as some other European telcos are concerned, and given up majority ownership of its Italian towers, the masts used for mobile networks. 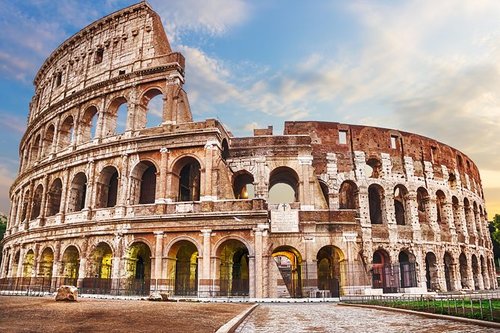 In better condition than Telecom Italia?

Now it is poised to flog a big chunk of its fixed-line network, too. Following the sale of a large minority stake, the plan is to combine this asset with a government-owned one, creating a single Italian network.

But if the plan comes off, Telecom Italia would control that network, which could be rented to service providers selling broadband to Italians, including Telecom Italia’s own customer-facing business.

Infrastructure competition would be eliminated and the burden of investing in a high-speed fiber network would be shared with other investors.

Instead of building several networks in the same busy areas, and duplicating their efforts, operators could more easily extend services into poorly served parts of Italy.

Yet Telecom Italia would have gone further than any other major European operator in ceding ownership of assets deemed critical to its operations.

FiberCop to take charge
The affair is more complicated than a Roman emperor’s family tree.

Telecom Italia has received a 1.8 billion (US$1.4 billion) offer from investment firm KKR for a 37.5% stake in an entity called FiberCop, made up of the dumb physical infrastructure that hosts Telecom Italia’s copper and fiber networks the ducts, sockets and other such property.

FiberCop is basically the fixed-line equivalent of the mobile towers that Telecom Italia has already spun off.

It would also own another asset called Flash Fiber, focused on the rollout of full-fiber networks. Telecom Italia currently controls 80% of that business, leaving the remainder to Fastweb, another Italian operator owned by Swiss incumbent Swisscom that is trading its 20% stake for a 4.5% share of FiberCop. 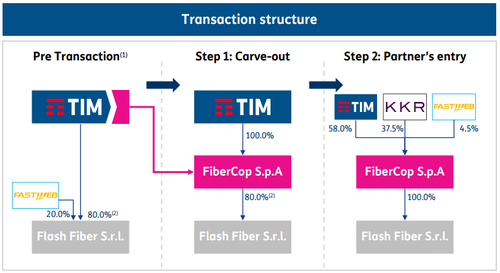 Source: Telecom Italia. Notes: (1) Before the carve-out TN Fiber to be merged in TIM. (2) 20% stake in Flash Fiber owned by Fastweb to be contributed in exchange of FiberCop shares.

All this rejigging would leave Telecom Italia with 58% of FiberCop and give that entity an enterprise value of about 7.7 billion ($9.2 billion).

Confused yet? Well, none of this is a certainty. KKR has had to extend its offer to the end of this month while Telecom Italia talks to the government about the single network scheme.

Under that, FiberCop would be merged with Open Fiber, an operator of a wholesale fiber network that is controlled by the Italian government. The question is what, exactly, this combination would entail, and who the main stakeholders would be.

“We are not talking about co-investment but a single company which companies can enter and invest in,” said Luigi Gubitosi, Telecom Italia’s CEO, during a call with analysts.

While other Italian operators such as Vodafone and Wind would be welcome as investors in that business, a majority stake for Telecom Italia is of paramount importance, he said.

“We cannot guarantee there will be a deal. There has to be a deal that makes sense for us.”

Company revenues for the first six months of the year were down about 14%, to less than 7.8 billion ($9.3 billion), compared with the year-earlier half, as coronavirus and competition tore into sales.

In Italy, figures show Telecom Italia has lost about 1.8 million mobile subscriptions of the human variety in the last year, including 269,000 in the recent second quarter, which it finished with about 20.2 million customers altogether.

Fixed-line revenues in Italy have also been falling as customers have disconnected services and cut spending.

Telecom Italia’s number of retail lines has fallen about 1 million in the last year, to roughly 8.9 million at the end of June. In the second quarter, Telecom Italia lost 44,000 broadband customers, its first decrease in at least six quarters.

The operational setbacks have weighed heavily on company profitability. Year-on-year, earnings before interest, tax, depreciation and amortization (EBITDA) dropped 22.6%, to around 3.4 billion ($4 billion), for the first half. The EBITDA margin shrank five percentage points, to 43.8%.

With social-distancing measures still in place, and consumers wary of venturing into physical stores, coronavirus might at least provide the opportunity to automate some tasks and speed up the switch to online sales.

Capital expenditure has also been cut by 15%, to less than 1.3 billion ($1.5 billion) for the first six months, although Telecom Italia attributed this to COVID-19-related delays as well as better efficiency in parts of its business.

But net debts, at nearly 26 billion ($31 billion), are still too high for such a shrinking business, even if they have fallen by 1.7 billion since the end of 2019.

Last month, Telecom Italia raised about 1.6 billion ($1.9 billion) for debt reduction when it agreed to sell part of its stake in Inwit, its joint towers venture with Vodafone, to Ardian, a consortium of investors.

But the move dilutes Telecom Italia’s indirect stake in Inwit to just 15.4%, with the rest held by Vodafone and various other investors.

Carry on carving
Telecom Italia is not stopping at fixed-line and mobile networks, either.

It is now preparing a similar carve-out of its cloud business, which is based increasingly on a strategic partnership with Google. The operational targets for this data center “NewCo” are 1 billion ($1.2 billion) in revenues and 400 million ($475 million) in EBITDA by 2024.

Whatever happens to NewCo, the current plans for the FiberCop business mean Telecom Italia would still own the backbone, central-office and cabinet equipment that supports broadband services for its customers.

In the mobile market, however, it has ceded control of not only its towers. Much of the basestation equipment that delivers 4G and 5G services is now shared with Vodafone, making service differentiation much harder and complicating decisions about equipment suppliers.

All this comes with major investments on the horizon. Besides extending fiber coverage, Telecom Italia has just started to roll out 5G mobile technology.

More than 90% of Milan will be covered with 5G by the end of the year, said Gubitosi, before Telecom Italia turns its attention to other major cities including Florence, Turin and Rome, as well as Italy’s industrial zones.

If Telecom Italia cannot land the deal for a single network that it so desperately wants, the slide is likely to continue.