Few of Europe’s telecom giants look as dilapidated as Telecom Italia. Every few months, another chunk of the edifice seems to be cordoned off or sold in a debt-reduction exercise. Domestic revenues are now shrinking at a double-digit percentage rate. Around ten employees leave the company every day. In a country of gorgeous old ruins, its business seems perpetually in need of renovation.

The deterioration continued in the September-ending quarter with a grisly set of figures. Sales have fallen 13% over the first nine months of this year, to about 11.7 billion (US$13.8 billion), compared with the same period of 2019. Earnings tumbled more than a fifth, to just 5.1 billion ($6 billion), despite efforts to slash expenses. Telecom Italia blamed the cost of restructuring its business, as well as the impact of COVID-19. The virus has hit it badly.

The good news is that Telecom Italia remains a profitable company. In fact, its net profit was up an impressive 38%, to almost 1.2 billion ($1.4 billion), thanks to lower taxes. Its sales decline also eased in the September-ending quarter, to just 5% on a like-for-like basis. And net financial debts have dropped more than 2 billion ($2.4 billion) since this time last year, to around 25.5 billion ($30 billion).

The market was not expecting a miracle, and Telecom Italia’s share price barely flickered during mid-morning activity in Milan after bosses clung to earlier guidance. The outlook is for a “mid-single-digit” decline in sales and earnings this year, on a like-for-like basis, followed by modest sales growth and earnings stability next year.

But Jefferies, a bank, is not so sure. The performance of the Italian mobile business is of major concern. According to Telecom Italia’s own breakdown of numbers, it has hemorrhaged more than 1.1 million customers so far this year, about one in 20. Prices also appear to have fallen sharply as Telecom Italia has responded to a competitive challenge. At 12.10 ($14.24), average revenue per user was 4% lower in the September-ending quarter than a year earlier. The growth inflection that is implicit in Telecom Italia’s guidance for next year and 2022 looks “ambitious,” said Jefferies.

A new study from Opensignal, a market-research firm, is not encouraging. It says the established mobile operator brands, including Telecom Italia, are all losing customers to Iliad, a low-cost rival that entered the market in 2018, as well as other discount brands. While COVID-19 has raised “price awareness” in Italy, there are also signs of unhappiness with the mobile network experience, according to Opensignal. 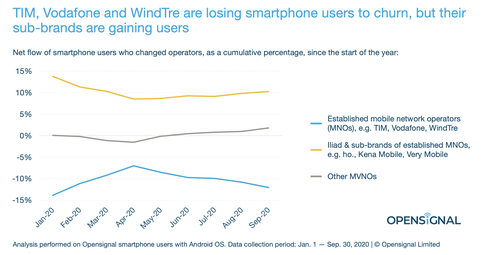 In this environment, Telecom Italia has been hacking away at expenses to safeguard profitability. Employees have suffered more than workers at most other service providers laying off staff. So far this year, Telecom Italia has cut its headcount by 2,718 roles, about 5% of the total. But since 2015, nearly 13,400 jobs have disappeared, or roughly one in five.

Provided this does not affect Telecom Italia’s competitiveness, investors will celebrate. As buying behavior moves online, operators have been able to close stores without losing business. The rollout of artificially intelligent “chatbots” is allowing some to reduce the number of customer care assistants, too. Others, including the UK’s Vodafone, say automation has depleted the workforce in their network operations centers (NOCs). Elisa, a Finnish operator, even claims to have a fully automated, zero-person NOC.

Perhaps the bigger worry is about capital expenditure and investment activity. That fell 12% in the first nine months, to about 2 billion ($2.4 billion), and 5% in the September-ending quarter. Under a new strategy, Telecom Italia says there has been “rationalization” of expenditure, implying it was previously spendthrift or wasteful.

But Italy is not currently well served by full-fiber networks. Those were available to only 31% of homes this time last year, according to the FTTH Council Europe, an industry association, well below rates of 86% in Spain and 57% in France. Nor is 5G yet widely deployed. Any signs of underinvestment by Telecom Italia could be unsettling, especially given Opensignal’s recent analysis and its remarks about a poor network experience.

Managers have been lopping off parts of the company in a bid to raise capital, slash debt and improve efficiency. In July, they raised about 1.6 billion ($1.9 billion) by selling a part of Inwit, a joint towers venture with Vodafone, to Ardian, a consortium of investors. That move dilutes Telecom Italia’s indirect stake in Inwit to just 15.4%. In a similar move, it has parked fixed-line assets in the oddly named FiberCop, agreeing to sell a 37.5% stake in this entity to KKR, another investment group, for about 1.8 billion ($2.1 billion).

Much is riding on talks with the government about the creation of a single fiber network, formed by merging FiberCop with the state-backed Open Fiber. In August, Luigi Gubitosi, Telecom Italia’s CEO, said ownership of a majority stake in this venture was of paramount importance to his company. Yet discussions over the terms of a deal are still grinding on.

In the meantime, Telecom Italia has recently amputated its data center business, now run in partnership with Google Cloud. It anticipates proforma revenues of about 500 million ($588 million) this year and is forecasting sales growth of 20% annually. Increasingly, that has the appearance of an asset powered and driven by the US Internet giant.

The shine has been wearing off Telecom Italia for years. At the turn of the millennium, when it was a much larger business, its share price traded at an all-time high of 5.51 ($6.48). Today, it is worth 0.34 ($0.40), down more than 70% since late 2015. Unlike some of those Italian ruins, it looks anything but gorgeous.