Germany’s “underserved” fiber market is about to get a lot busier.

Telefnica wants to build an entirely new fiber network in parts of the country that have been overlooked by Deutsche Telekom, the phone incumbent, and German cable companies.

The wholesale broadband network would be open to all players but able to count on Telefnica Deutschland, the Spanish telco’s local subsidiary, as an anchor tenant, said ngel Vil, Telefnica’s chief operating officer, during a phone call with analysts today.

The project is being led by Telefnica Infra, the infrastructure portfolio manager that Telefnica set up as part of its latest restructuring in late 2019.

While Telefnica Deutschland would probably have a stake in the new venture, Telefnica is on the lookout for equity partners to limit its own financial exposure.

It has already had expressions of interest, said Vil. “When there is more interest, we will share,” he told analysts this morning.

In those, Telefnica Deutschland already relies on wholesale agreements with Deutsche Telekom and Vodafone Germany’s biggest cable operator following its takeovers of Kabel Deutschland and Unitymedia to provide fixed-line services.

It would also stimulate debate about the future ownership of telecom assets in Europe as investment firms are drawn to an activity from which service providers look poised to retreat.

Besides Telefnica, European operators including Vodafone, Orange and Telecom Italia have already spun off their mobile towers to raise capital for debt repayment and other investments.

Such efforts have made Infra responsible for Telefnica’s 50.01% stake in Telxius, a towers company whose other shareholders include KKR and Pontegadea, two investment firms with respective stakes of 40% and 9.99%.

In Infra’s biggest deal so far, about 10,100 mobile sites in Germany were transferred from Telefnica Deutschland to Telxius for a transaction fee of about 1.5 billion ($1.8 billion).

Investors like these infrastructure assets because they are a guaranteed source of long-term revenues. The owners are essentially leasing the property needed for the mobile networks so important to pandemic-era life.

The same logic applies to fixed-line networks and companies already exist that play a Telxius-like role in the fiber market.

A standout example is the UK’s CityFibre, which rents use of a wholesale dark fiber network to service providers in the UK. Vodafone is one of its biggest customers.

But there are good reasons why parts of Germany remain fiber-free. Rolling out fiber networks to homes in sparsely populated communities is an expensive business. Recouping that investment could take years.

Deutsche Telekom previously estimated that a full-fiber network covering the whole of Germany would cost between 60 billion ($70.8 billion) and 80 billion ($94.4 billion). Finishing last year with nearly 14 million customers, its existing broadband business made just 4.2 billion ($5 billion) in retail revenues in 2019.

All that said, the opportunity for a more targeted fiber deployment could be substantial. FTTH Council Europe, an industry association, reckoned just 10% of German homes had access to a full-fiber connection in September last year. 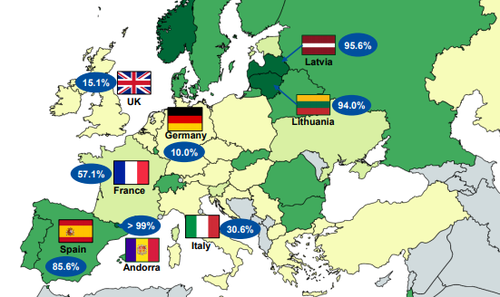 Telefnica has yet to share further details of its plans, but equity partnerships with the likes of KKR could help to overcome any investment hurdle.

Alone, it would struggle. Results published today showed the Spanish operator is slashing capital expenditure and operating costs to protect free cash flow. It also has about 37 billion ($43.6 billion) in net debt on its balance sheet, a sum it is desperate to reduce through asset sales.

The timing of the move is interesting. As former office workers take refuge from COVID-19 in their homes, and business parks empty, there may be a pent-up demand for high-speed broadband services in rural communities.

In some countries, analysis of usage patterns clearly shows that some network traffic has shifted out of the city.

LatAm fiber sale
Germany is not the only country where Telefnica is courting equity partners for a fiber investment.

In parts of Brazil, Infra is working on the sale of a 50% stake in a part of the existing fiber business that will be hived off and deconsolidated from Telefnica’s accounts. “It is a huge market and we cannot cover it all with our capex,” said Vil.

Telefnica is going even further in Chile, where a majority stake in its fiber assets is now up for sale. “More projects of this kind could come in the rest of the Hispano-America region,” said Laura Abasolo, Telefnica’s chief finance and control officer.

Such willingness to cede control would surely have been unthinkable just a few years ago and is perhaps a reflection of the growing financial pressure on the Spanish firm.

Amid the COVID-19 crisis, the operator’s market capitalization is around 30% its level in mid-2015. Debts are not falling quickly enough.

Major European rivals including Vodafone and Deutsche Telekom have previously insisted they will not relinquish control of the infrastructure assets they use.

Yet France’s Orange was this month reported to be considering the sale of a 50% stake in its Polish fiber business.

Only today, KKR was said to have made a 1.8 billion ($2.1 billion) offer for a 38% stake in Telecom Italia’s fixed-line network. While leaving the Italian incumbent in control, that move could precede a merger between those assets and the government-backed Open Fiber, according to a Reuters report.

Nobody likes to sell the heirlooms and family silver. But when hardship strikes, there may be no other options.