Posted at 15:35h in by fiberguide 0 Comments

Stockholm/Rome – 5 June 2018 – Telia Carrier announced today that it has extended its network in Italy with a new PoP (Point-of-Presence) in Rome. Situated in the NaMeX datacentre in the heart of the city, the new PoP will provide crucial backbone and Cloud Connect services for major operators, content providers and enterprises requiring high-speed and direct connectivity in the region.

The global wholesale carrier market in Italy is seeing a heightened demand for high capacity IP and transport services, driven to a large extent by an increase in fibre-to-the-home (FTTH), especially in the south. With this in-country expansion, Telia Carrier will be well placed to support the growing need for a variety of services across the entire length of the country, from its existing Milan PoPs in the north and the new PoP in Rome.

“Throughout the country, we have seen traffic volumes increase steadily over the last couple of years. Having launched two additional PoPs in Milan in 2017 to support the ever-increasing demands of service, content and cloud providers, we are now extending into Rome, a major infrastructure hub for the south of Italy,” said Davide Binaghi, managing director of Telia Carrier Italy. “With submarine landing stations in Sicily and Bari, we are also perfectly positioned to supply the backbone services needed to serve traffic to other geographical regions, such as northern Africa and the Middle East.”

Top-ranked global backbone
Telia Carrier’s global fibre backbone has grown organically, without acquisitions, and was the first to be 100G-enabled in both Europe and North America. It was also the first network to successfully transmit 1 Tb/s in super channels on its U.S. network. According to Dyn Research’s global backbone rankings, Telia Carrier’s global IP backbone, AS1299, is currently ranked number one. Telia Carrier’s rapid growth and ascension through the rankings was highlighted in Dyn’s ‘Baker’s Dozen’ report. The company enables worldwide connectivity by connecting more than 265 Points of Presence (PoPs) across Europe, North America, Asia, and the Middle East.

“We are truly delighted that Telia Carrier has decided to extend their network into our Rome facility ,” said Maurizio Goretti, CEO of NaMeX. “Our neutral Internet exchange and interconnection point is dedicated to supporting national and foreign Internet service and content providers. NaMeX has been steadily growing in recent years, reaching almost 90 members and launching two additional Points-of-Presence in the city to offer our community a wider range of colocation facilities and services. With the deployment of Telia Carrier’s new PoP at our site, NaMeX customers are now just a cross connect away from one of the world’s best-connected Internet backbone networks.” 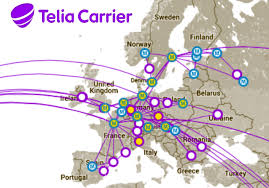