The Key Device Needed for a Quantum Internet

30 Jun The Key Device Needed for a Quantum Internet

As researchers worldwide work toward a potential quantum internet, a major roadblock remains: How to build a device called a quantum repeater.

Advances in quantum information science have brought on the possibility of a quantum internet—networks that carry information via photons in superpositions of states, called qubits, rather than the 0’s and 1’s that today’s networks shuttle from place to place.

In the last decade or so, researchers around the world have taken big steps toward building quantum networks. While many groups have started testing small networks tens of miles in size, major obstacles, including the need to develop a key piece of hardware, lie in the way of larger quantum networks. “There’s still lots of research to be demonstrated,” says Gabriella Carini of Brookhaven National Laboratory, New York, an organizer of a “Quantum Internet Blueprint Workshop” that took place in February. “But if you don’t have a vision, all the pieces won’t talk together.” The workshop was a step toward “establishing a nationwide quantum internet” in the US, an effort that has gained momentum with the National Quantum Initiative Act in 2018 and the recent budget request by the Trump administration to fund plans for a quantum internet.

The appeal of quantum networks lies in both immediately practical applications and potential advances for basic science research. One of the clearest applications is the ability to send secure messages without the threat of eavesdroppers. Because information is encoded with superpositions of states, any interception of a message would make qubits’ wave functions collapse, signaling that the message was intercepted.

Qubits can also encode more information than classical bits, so quantum networks could potentially carry higher densities of information more efficiently. “It’s a fundamentally new way to connect information,” says David Awschalom, a researcher at the University of Chicago and Argonne National Laboratory who is working on a quantum network effort in the Chicago area. Quantum networks could advance developments in remote-sensing technology and telescopes as well as applications that scientists don’t yet realize. A quantum internet could be “another revolution at the same level as the classical internet,” Carini says.

However, the same properties that make quantum networks useful present significant challenges. Ground-based networks, whether classical or quantum, often use optical fibers to direct information from place to place in the form of photons. As photons travel through a network, some will be lost over time as a result of impurities in the fibers, weakening the signal. In classical networks, devices called “repeaters” intermittently detect the signal, amplify it, and send it off again. But for information carried by photons in superpositions of states, or qubits, “it’s not possible to read the signal without perturbing it,” Awschalom says.

The key to long-distance quantum communication, researchers say, is to figure out how to build a “quantum repeater” equivalent to the existing classical one. Without a quantum repeater, a qubit would typically only be able to travel through a few miles or up to about 100 miles of fiber—far too little range for widespread networks.

But quantum repeaters are far more complicated than classical repeaters, and no one has made a functional one yet. “I think it will still be a while before it can be a practical technology,” says Jian-Wei Pan of the University of Science and Technology of China. In China, Pan and other researchers have made progress toward quantum networks even without quantum repeaters. One example is a 1200-mile fiber network constructed to connect Beijing and Shanghai. But since it doesn’t have quantum repeaters, this network isn’t fully quantum encrypted from end to end; there are several nodes along the route where the information is decrypted and then encrypted again. These nodes are a “temporary solution,” Pan says, while researchers work to develop quantum repeaters.

Another temporary way around not having quantum repeaters is to employ satellites. Earlier this month, Pan and other researchers in China announced that they were able to use a satellite to transfer a quantum “key” between two ground stations about 700 miles apart.

In the US, researchers are building and testing small quantum networks in locations near Chicago, Boston, and New York. One of these is a fiber network connecting Stony Brook University and Brookhaven National Laboratory that Figueroa’s team has been working on for a couple of years. But even before the inter-campus network, Figueroa and colleagues were working on developing hardware for quantum communication. Researchers in the field have known that quantum repeaters would be necessary for long-distance quantum networks for quite a while, Figueroa says, but the technology to really tackle the problem wasn’t available until recently. “Now we’re getting there, where we can build the first prototypes,” he says. “The goal is, in a few years, to try to really demonstrate a quantum repeater in the field.”

There are still many questions to address before researchers can assess whether a nationwide quantum internet is possible, Figueroa says—like whether they will be able to design quantum repeaters that work well enough outside of the lab and whether it will be feasible to produce a large enough volume of the necessary hardware.

“Those are questions that, right now, don’t have an answer,” he says. “And they need to be answered before we can make the claim that this quantum internet can be built.”

Erika K. Carlson is a Corresponding Editor for Physics based in Brooklyn, New York. 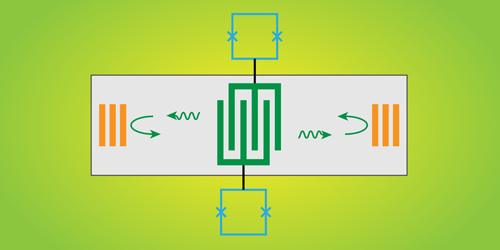