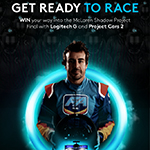 Posted at 07:01h in by fiberguide 0 Comments

Buckle Your Seatbelts and Tune In to the Premiere eracing Global Competition on November 16th from Las Vegas, Nevada, Live on Twitch
LAUSANNE, Switzerland & NEWARK, Calif.–(BUSINESS WIRE)–Logitech G, a brand of Logitech (SIX: LOGN) (NASDAQ: LOGI) and leading innovator of gaming technologies and gear, announced today that the Logitech G Challenge Grand Finals, which will determine the global esports racing champion, will be held on November 16, 2019 in Las Vegas, Nevada.

With over 11,000 drivers racing through a mix of online qualifiers and in-person wildcard competitions, eight winners of the four regional competitions in Europe, Asia, Latin America, and the United States, will earn their chance to compete against the best of the best in the 2019 Grand Final of McLaren Shadow Project Season 2, with a spot on the McLaren Shadow esports team on the line.

“Logitech G has more than 20 years of passion, dedication and commitment to eracing under it’s belt and this year we are upping the ante,” stated Vincent Borel, general manager of gaming simulation at Logitech G. “We’ve found the best racers from around the world and are bringing them to Vegas to get behind the wheel of a virtual race car and compete for the ultimate prize, the opportunity to become a professional simracer. This is going to be extremely competitive and very entertaining.”

The Grand Final will be globally broadcasted on the Logitech G Twitch channel, https://www.twitch.tv/logitechg, from 4:00 PM to 7:00 PM PDT on November 16.

“Logitech G has been a trusted partner of the McLaren Shadow Project since inception, and has allowed us to truly demonstrate that the connection between the virtual and real world of racing can be real and profound,” said Mark Waller, Managing Director, Sales and Marketing, McLaren Racing. “We’ve been hugely impressed by the new and skilled eracing talent that has come through this qualifier previously, and we look forward to seeing who emerges from the Logitech G Challenge and into the Grand Final of the McLaren Shadow Project in December.”

Drivers will compete in four races, which include five to ten minutes of qualifying, and between eight to ten minute races, totaling 20 minutes of maximum racing against each other in simulation rigs fitted with the latest Logitech G gear. To find out more about the competition and where to tune in, please visit the G Challenge website.

Logitech G, a brand of Logitech International, is the global leader in PC and console gaming gear. Logitech G provides gamers of all levels with industry-leading keyboards, mice, headsets, mousepads and simulation products such as wheels and flight sticks – made possible through innovative design, advanced technologies and a deep passion for gaming. Founded in 1981, and headquartered in Lausanne, Switzerland, Logitech International is a Swiss public company listed on the SIX Swiss Exchange (LOGN) and on the Nasdaq Global Select Market (LOGI). Find Logitech G at logitechG.com, the company blog or @LogitechG.

Logitech and other Logitech marks are trademarks or registered trademarks of Logitech Europe S.A and/or its affiliates in the U.S. and other countries. All other trademarks are the property of their respective owners. For more information about Logitech and its products, visit the company’s website at logitech.com.
Contacts
Logitech Gaming
Derek Perez
Global Communications
408-391-6454
[email protected]