‘Tis the season to protest, and edicts about social distancing won’t stop the marchers. Even if the protest weren’t by definition a backlash against the system, it doesn’t have the transmutability into the online world of other, er, social activities. The virtual pub, essentially a videoconference run by drunkards, just about works as a sad domestic alternative to the beer garden. No one has proposed a session of Zoom-enabled banner waving and slogan chanting.

Or have they? A flyer dropped through my London letterbox this week advertises The 5G Summit, a free 5G online event. It sounds like the kind of sensible show put on by my own employer, until a few Google searches turns up a Facebook page linking it to the Global 5G Protest Day on June 6.

As reported yesterday by Light Reading, this has already prompted Ericsson, which makes 5G equipment, to halt work on US cell towers this weekend. Its fear is that technicians and masts will be attacked by protesters who think 5G is a health threat. AT&T and T-Mobile, two US operators, have reportedly urged workers to be careful. NATE, a trade group representing cell tower technicians, warns members to be vigilant. Outside the US, weekend demonstrations are planned in Italy, Sweden and the UK, among other places. 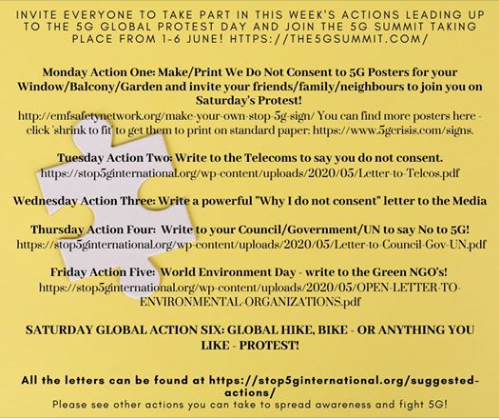 Proof of The 5G Summit’s link to a set of protests the industry fears will turn nasty.

Speakers at The 5G Summit appear to have more old-fashioned worries, though. “Does 5G wireless pose a great risk to your immune system, your well-being, your life?” the website asks rhetorically. “Learn the unbiased truth from the world’s leading independent experts.” These models of impartiality include Rashid Buttar, who is to be interviewed on how “CIA-declassified research reveals massive bio-effects from 5G mm-Wave radiation,” Martin Pall (PhD), who will tell you “How wireless causes harm” and Patrick Wood, discussing “5G: the agenda for total control.” It’s an echo chamber of 5G carping.

Anyone in doubt need only scroll down a bit to read that: “Millions of ‘small’ cell towers will be added to every block (which is a serious privacy concern). Each tower emitting radiation at levels known to cause weakened immunity, cancer, sterility, DNA damage and other harm … especially to our children, who are most at risk.”

In other words, if you end up with these cell towers in your neighborhood, you’ll be a tumor-ridden magnet for every disease known to man, your kids will be doomed and sinister companies or government forces will be able to check out your private affairs like a library book.

How this would benefit the organizations developing 5G technology is not one of The 5G Summit’s modules. Unless mast burning turns into a different sort of pandemic, the expectation is that 5G will eventually become as widely used as older mobile broadband technologies. Those currently serve about 6.3 billion subscriptions globally, according to Ericsson. Wiping out most of the population is not a strategy for profit growth.

This depiction of 5G as an extinction-level event is also undermined by the experience of 4G, which has been around for years, picked up around 3.2 billion subscribers and failed to enact death and destruction on a biblical scale. Ah, but 5G uses much higher and more deadly spectrum bands, say the critics. Except that it doesn’t, really. Operators including T-Mobile are deploying 5G in the same sub-GHz bands they use with 4G. In Europe, the preferred range is 3.5GHz previously used for other broadband technologies and not much higher than the frequencies awarded for 3G and 4G services.

Yes, there is a millimeter wave side to all of this, and especially in the US market. These frequencies do occupy a much higher range than the so-called “midband” spectrum that is popular elsewhere. But they are still far below the “ionizing” levels, the ones that can break chemical bonds and be hazardous to people. Ionizing spectrum starts at 30 petahertz (a petahertz is 10 to the power of 15 hertz). 5G will never get above 66GHz. You might as well worry about getting altitude sickness on a beach.

There is a health risk linked to 5G, though. It comes when birdbrained thugs damage telecom equipment providing connectivity for hospitals, when telecom engineers doing their jobs are threatened by knife-wielding yobbos, and if pointless protests turn violent, as the industry fears they will. Masquerading as a forum for “unbiased” experts, an online event so clearly linked to those protests may have a lot to answer for.