Posted at 07:33h in by fiberguide 0 Comments

As miracles go, it is not quite up there with the biblical raising of Lazarus, but the resurrection of Ericsson’s digital services business will have brightened the messianic glow that surrounds CEO Brje Ekholm, seen by many observers as the Swedish firm’s savior.

Easy to overlook in the shadow of the much bigger networks division, it clawed its way to profitability in the final quarter of 2019 and expects margins to soar in the next couple of years. In the market for “core” network products, it is already picking up work at the expense of rivals and could thrive in 2020: New 5G systems are emerging just as some European operators prepare to eject Huawei, a Chinese competitor increasingly viewed as a threat to security.

With all the attention on networks, the turnaround under Jan Karlsson, who took charge of the business about two years ago, has been easy to miss. Employing about 17,000 of Ericsson’s 99,400 employees, Digital Services contributes less than a fifth of company sales and revenues of 39.9 billion Swedish kronor ($3.7 billion) last year were about 12% less than it made in 2016. 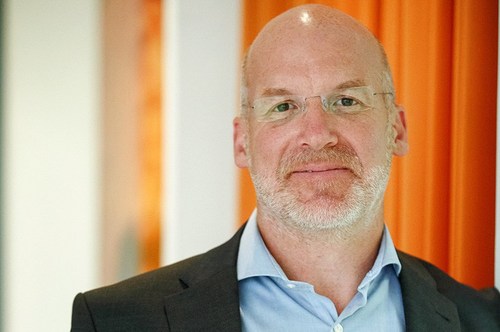 Ericsson’s Jan Karlsson: “The marching order was to take us to profitability.”

Back then, however, it recorded an operating loss of SEK6.7 billion ($700 million), and that ballooned to nearly SEK28 billion ($2.6 billion) in 2017. Losses narrowed to just SEK4 billion ($370 million) last year and as little as SEK200 million ($18.6 million) in the fourth quarter. Excluding restructuring charges, it managed a wafer-thin profit.

The trajectory leaves Karlsson confident that Digital Services can achieve an operating margin of 10% to 12% in 2022, hitting the target set by Ekholm. “The marching order was to take us to profitability,” he tells Light Reading. “The good thing is that I was given time to do that.”

Without some leeway and long termism, Karlsson’s only option would have been to “cut costs like a maniac,” he says. Instead, he has been able to take a more considered, strategic approach to revival. That has meant going about things in a very different way from some previous managers. Open source, once a taboo subject in Ericsson circles, is now part of the religion, for instance.

The immediate priority, though, was to renegotiate or even terminate scores of unprofitable or barely profitable contracts that Ericsson had accumulated under Hans Vestberg, Ekholm’s predecessor, when revenue growth was the main objective. “Many projects had a scope that was quite wide and complex and those have been relatively costly to complete,” says Karlsson. “In 2017 we had 45 of them and by the end of 2019 there were 10 left.”

In tandem, fewer customers now want to buy the “full stack” of IT services from a single vendor, according to Karlsson. Some evidence of that came last year when Ericsson scrapped Revenue Manager, a full stack of business support systems that Ericsson launched in 2016 to the sort of frosty reception the Vikings got at Lindisfarne. This previous, end-to-end approach forced Ericsson to plug gaps in its portfolio and embrace a systems integrator role. Profitability suffered.

Nowadays, after an apparent road-to-Damascus conversion, the digital services catechism includes expressions like “cloud native,” the not-so-catchy “continuous integration, continuous development” and, yes, even “open source.” It’s a far cry from 2017, when Ulf Ewaldsson, then head of digital services, was dismissive. “I find it hard to see that very large portions of software in the telco industry will be open sourced,” he told Light Reading during a meeting in May that year.

“If I look at open source today, our commitment to that is significant,” says Karlsson. “Why do it if you can get it from open source and build on top?” Backing up the boast, he insists Ericsson is now the world’s third-biggest contributor to ONAP, an open source automation platform whose main service provider disciples include AT&T, China Mobile, Orange, Verizon and Vodafone.

What’s more, the latest Digital Services products have been entirely re-engineered to take full advantage of the latest technology developments, says Karlsson. “When we went from native to virtualized, we had to do some work on code. With cloud native, we have rewritten the applications.”

If that sounds like a claim Ericsson cannot validate, data gathered by a third party is encouraging. Dell’Oro, a research firm that is highly regarded in the telecom equipment sector, says Ericsson has gained share in the market for core network products during the last year a period in which operators have started investing in the 5G core while emphasizing the importance of cloud-native technologies. “The 5G core needs to be cloud-native,” says Karlsson.

Ericsson is proud enough to have published details of its 5G core network progress. Today, that includes 49 commercial customers, 25 of which have launched commercial services, as well as more than 70 trials and “proofs of concept.”

5G serendipity
Notwithstanding the impact of coronavirus on the telecom sector, it may have picked a good time for digital revival. Release 16, the next 5G standard, promises additional core network features that could persuade more operators to start investing in this area. Provided there are no delays, it should be finalized several months from now.

At the same time, Europe’s authorities are leaning toward the view that so-called “high-risk vendors” (meaning Chinese ones) are manageable in the radio access network but unacceptable in the core. The UK has already imposed 5G core bans on Huawei and ZTE. Anticipating restrictions, Vodafone has started to remove Huawei from the core networks it maintains throughout Europe a procedure it expects to cost around 200 million ($226 million).

It seems like a fantastic opportunity for the Swedes? “I think it is more likely to cause pain for the industry,” says Karlsson, echoing a company line about investment uncertainty that has surprised no one as Ericsson bids for lucrative 5G contracts in China. But regardless of the geopolitical sensitivities, Ericsson has been a substitute for every one of its main rivals, he claims. “It is easier to swap a vendor than in radio,” he insists. “The driver here is that it is software in a few locations.”

If swaps are so easy is this cloud-native world, then Ericsson surely has a lot to lose, too? Digital Services today has about 300 customers serving hundreds of millions of consumers globally, according to Karlsson. That gives rivals a huge field to attack, and the cloud-native shift could throw up new competitive challenges. Only this week, IT giant HPE unveiled a new 5G core system. “For us you could say it is a threat if you have a big installed base, but fortunately it has been an opportunity,” says Karlsson. “We have gained market share in the virtualized wave and I think we will gain market share in the cloud-native wave.”

Despite this confidence, the big question for some analysts and investors is why Ericsson should worry itself with a Digital Services turnaround as opposed, say, to a divestment when most of the money is in radio. Karlsson is certainly not anticipating any short-term surge in sales. Even if it achieves its margin targets, annual operating profits would be less than 80% of Ericsson’s total for the recent fourth quarter.

“For me this is a defining moment for the telco industry. Will it be able to succeed in the enterprise market?” explains Karlsson. If the 5G core lives up to the hype, spawning an array of lucrative new enterprise services, a return to sales growth could lie ahead for some of Ericsson’s biggest customers. That really would be a raising-of-Lazarus moment, and one that can only benefit Ericsson.