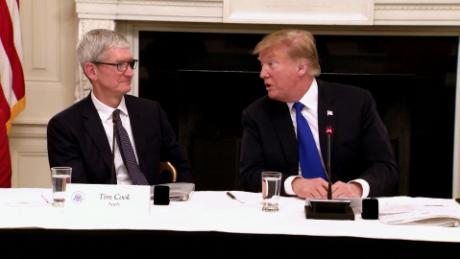 Among them: Trump said he asked CEO Tim Cook to get Apple (AAPL) involved in “building” 5G in the United States. “They have it all — money, technology, vision and [CEO Tim] Cook!” Trump tweeted. But Apple is a cell phone maker, not a cell phone carrier. Getting into building 5G would represent a major shift in Apple’s business strategy. “I think they’re just as likely to get into the coffee house business,” said Ian Campbell, CEO of research firm Nucleus Research. “That would be a big step for Apple and highly unlikely that they would ever do that. Apple is very much a consumer driven company.”Apple did not immediately respond to a request for comment.5G is the next generation of wireless technology that’s expected to change the way people live and work. The rapid internet speeds (5G is expected to be 100X faster than 4G) will allow for development of such technologies as self-driving cars and smart cities. Certainly, Apple and many other tech companies are looking forward to building new products that take advantage of 5G’s capabilities. But any company building 5G has to own and update network infrastructure — think radio cell towers and fiber optic cables in the ground — things that Apple does not have.The major players in the US wireless market already are engaged in fierce competition to make 5G as widely available in as many cities as possible. Even with the existing equipment, competitors in the wireless space are pouring money into rolling out 5G. AT&T, CNN’s parent company, is spending $20 billion a year on 5G; Verizon is investing $17 billion.For that much money, Apple could build 17 new Austin campuses. Or more likely, it could invest further in the services business the company is counting on to become a more significant revenue driver in coming years. Apple is reportedly spending $6 billion on content for its new streaming service, Apple TV+.Some other tech companies, such as Cisco, are also developing some of the components that go into 5G networking equipment. But Apple is unlikely to move in that direction, either, Campbell said. “There are plenty of strong players in that market,” Campbell said. “Apple doesn’t have the production facilities or support capabilities to do that. They’ll stick to watches and trendy phones.”That’s not to say it would be impossible for Apple to enter that new line of business — it does have hundreds of billions of dollars of cash on its books. But it would be a major strategic shift and Apple would potentially be too far behind the other players who have invested years and billions of dollars in 5G. One thing Apple could do to potentially push the wireless carriers to speed up 5G’s rollout is release 5G enabled products, something it has not yet done though many analysts think the company is likely to release a 5G phone next year. In July, Apple acquired Intel’s smartphone modem business after Intel (INTC) said it would no longer make 5G modems for smartphones, giving Apple more of a role in developing key parts of its phones as the 5G future approaches. So far, there are several 5G enabled smartphones on the market from Samsung (SSNLF) and Motorola (MSI), but none so ubiquitous as the iPhone. And it remains hard to find places where 5G is easily and consistently accessible.Many US lawmakers, including Trump, think it’s key to national security that the United States have nationwide 5G before China does, though China is currently leading in that race.Wedbush Securities tech analyst Dan Ives said he thinks that this is what Trump’s comment to Cook referred to. “Cook remains a potential leader in this technology transformation around 5G,” Ives said. “China has the lead in 5G, but the US has Tim Cook and Apple.”Separately, Trump also said of his visit that he “opened a major Apple manufacturing plant in Texas that will bring high paying jobs back to America.” But during the visit, Trump actually toured a production facility run by Flex, a company Apple (AAPL) contracts with to make the Mac Pro. Apple is opening a new Austin campus — an expansion of its existing presence in the city — but it’s a mile away from the manufacturing plant Trump visited, and isn’t expected to open until 2022. Cook has worked to develop a relationship with Trump in recent years as he tries to navigate the potential impact of the US-China trade war on Apple. That’s more important than ever these days, as a new tariff on iPhones and other consumer tech goods threatens to hit Apple’s bottom line. Apple was previously granted a temporary exemption from the iPhone tariffs, but the 15% import tax is now expected to go into effect December 15.While touring the manufacturing facility, Trump was asked whether he’ll be exempting Apple from the tariffs at the company’s request.”We’re looking at that and the problem that we have is that Samsung, it’s a great company but it’s a competitor of Apple. And it’s not fair if, because … we made a trade deal with South Korea, but we have to treat Apple on a somewhat similar basis as we treat Samsung,” Trump said while standing alongside Cook.