The commercial wireline units of major incumbent telcos plowed through the pandemic through the first half of 2020 while cable operators saw their rate of growth tap the brakes as small and mid-sized businesses paused telecom service or failed to survive temporary shutdowns.

But that situation might only be temporary and could possibly reverse itself in the months to come as surviving businesses start to reevaluate their service needs, strongly consider switching to another provider, and adopt new services, according to the analysts at MoffettNathanson.

Revenues for the overall US commercial wireline industry dipped 1.7% in Q2 2020, indicating that the rate of contraction for 2020 will be much better than the -5% to -7% that was predicted five months ago as the pandemic sparked widespread shutdown orders that impacted businesses both large and small. 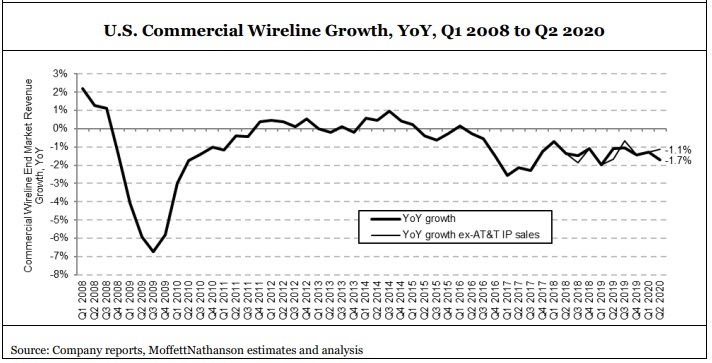 While incumbent telcos such as AT&T and CenturyLink have fared well as competitive insurgents (such as the cable operators) were dealt some pain during this period, MoffettNathanson believes that the overall growth rate of wireline revenues will indeed deteriorate further in the second half of 2020 or in early 2021.

That thinking stems from A cadre of expectations a limited return of business-as-usual as a greater number of workers return to offices, an anticipated wave of small business closures that have yet to hit the numbers, and a continued pause on longer-term decision making that extends already elongated sales cycles.

While there was a surge in revenues from collaboration and voice services as workers hunkered down at home, it’s “highly likely that these revenue streams will start to subside as employees return to offices and/or businesses begin to reflect on and optimize their spending,” MoffettNathanson senior analysts Craig Moffett and Nick Del Deo explained in a report (registration required) issued Monday.

As for small and midsized businesses, they point out that government programs have helped to keep the doors open, a situation that could be temporary for a number of them. That, they add, is particularly relevant for a US cable industry that is “disproportionately exposed to the SMB sub-segment.”

But how the telcos and cable operators will fare in the SMB sector is still hazy, as they are all ill-equipped to forecast how potential business failures will impact results and how the US government might again respond.

“To state the obvious, much depends on the size, timing, and details of additional government stimulus,” the analysts explained. “A follow-on stimulus bill remains overwhelmingly likely in the eyes of most market observers, but, even if that turns out to be correct, the specifics of any such bill remain uncertain.”

A cable comeback?
Though incumbent telcos have posted better sequential growth than cablecos in the commercial wireline sector as businesses held off on making big changes, a reversal is possible in coming quarters. The pandemic, the analysts surmised, “is causing businesses to actively evaluate their telecommunications needs, which is likely to stimulate the adoption of newer services and drive additional switching behavior.”

“The story for cable is the inverse of that for the incumbents: weaker in the short term, as we see it, but stronger once the COVID-19 crisis has passed,” the analysts wrote.

As for those incumbents, business voice services (for both legacy and VoIP) will face incremental pressure and risk as some businesses shift to more flexible, feature-rich offerings, such as unified communications as a service and videoconferencing, the analysts predicted. Likewise, they expect the pandemic to help accelerate more transitions from MPLS-based platforms to more flexible and scalable SD-WAN offerings.

Cable operators “have nothing here to defend and are therefore delighted to undercut the high prices of the incumbents for legacy services like MPLS,” they explained.