Following a multi-month period of relatively stability, upstream and downstream peak usage on US cable networks is on the rise again.

Peak downstream usage on US cable networks had climbed 27.4% since March 2020, when pandemic-driven stay-at-home orders produced spikes in network usage, according to the NCTA’s COVID-19 Dashboard. The dashboard tabulates and illustrates network usage data from a group of major and independent US cable operators, including Altice USA, Cable One, Charter Communications, Comcast, Cox Communications, GCI, Mediacom, Midco and Sjoberg’s, a service provider based in Thief River Falls, Minnesota. 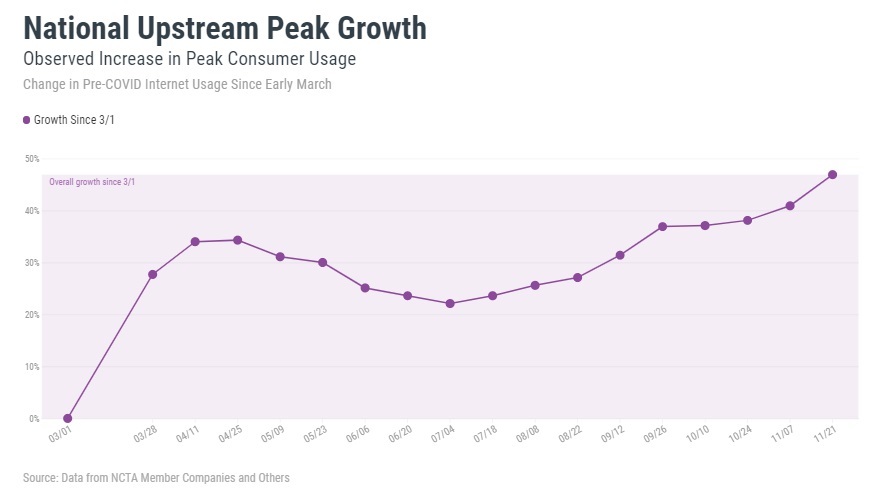 Upstream peak usage is flirting with a 50% increase since March 2020, according to the NCTA’s COVID-19 dashboard.
Click here for a larger version of this chart.

It’s a similar story for the upstream, as peak usage for the week of November 21 ballooned by 46.9% when compared to the March 2020 benchmark. 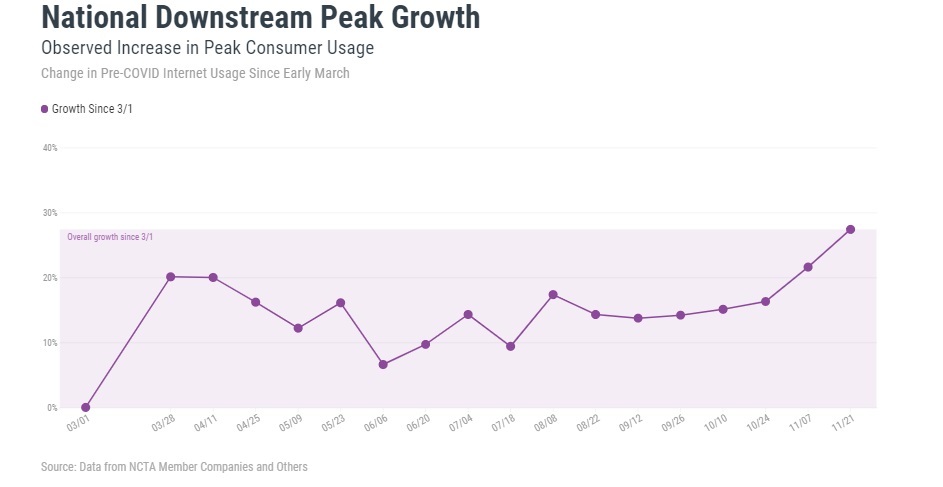 Downstream peak usage on measured US cable networks has nearly doubled in the past month, according to NCTA’s COVID-19 dashboard.
Click here for a larger version of this chart.

The rate of growth in both the upstream and downstream are records, according to the data collected over the past eight-plus months.

During the pandemic, cable operators have slowed down or delayed some next-gen network projects, including moves to a distributed access architecture (DAA). Instead, operators have been making more traditional moves such as splitting nodes or adding capacity to their existing converged cable access platforms (CCAPs) to keep data demands in check.

Jeff Heynen, VP, broadband access and home networking at Dell’Oro Group, said the end of the summer slowdown and the start of this latest wave of demand on residential cable networks entered the picture as students returned to school (with many using broadband to learn remotely) alongside an uptick in work-at-home activity. The surge in peak usage is also showing up amid a rise in COVID-19 cases across the US.

Cable operator buying patterns have mirrored that trend. According to Dell’Oro, total cable access concentrator revenue jumped 6%, to $280 million, in Q3 2020, driven by solid growth in CCAP license purchases across multiple regions. Cable access concentrator revenues (a category that includes DOCSIS infrastructure elements such as CCAP cores and chassis, virtual CCAP licensing and DAA nodes and module) dipped 8% in Q2 2020, when cable operators nailed up enough capacity to handle the rise in demand seen in the early stages of the pandemic.

Heynen said some outside plant work done earlier in the year, including mid-splits or high-splits that increase the amount of capacity that is dedicated to the upstream, resulted in a boost in CCAP capacity licenses in Q3.

He noted there’s also been an ongoing demand for new nodes and node splits as operators started to see sustained utilization reach thresholds that warranted them. That threshold varies by operator, but Heynen said 70% utilization is a typical trigger for an operator to split a node and, therefore, distribute the bandwidth to a smaller group of homes hanging off those nodes.

That scenario continues to put a crimp on the rate of deployment of new distributed access architectures. There’s was “no significant jump” in Q3 with respect to DAA activity as sales of remote PHY nodes and remote PHY devices remained relatively flat, he said.

The same can be said for the deployment and adoption of virtual CCAP technologies. That activity continues to grow in small increments and has yet to reach the degree of a clear transition or shift to virtualization of the cable access network, Heynen said.

Meanwhile, the deployment of DOCSIS 3.1-powered consumer premises equipment (CPE) is accelerating amid the launch and support of 1-Gig broadband service and the resolution of pandemic-fueled supply chain issues that created pent-up demand.