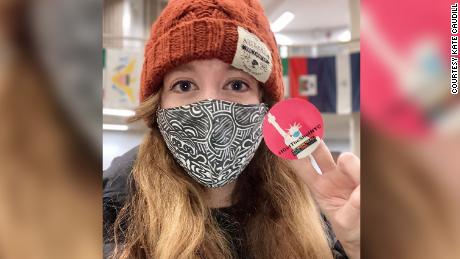 As the main caretaker for her immunocompromised mother, who sewed and donated more than 2,000 masks in the early days of the pandemic, Hall said capturing the moment was a major step toward releasing some of the anxiety that upended her mental health in the past year. “I shared a selfie because it was the first time I had been able to look forward to the future in a year,” Hall told CNN Business.As the vaccine rollout has expanded to more people around the country, vaccine selfies have spread across social networks and chat apps. Whether they’re taken at the time of the shot, on the car ride home or in front of an official banner at a vaccine site, people are celebrating and broadcasting that they’re doing their part to help stop the spread of the virus. Some vaccine sites are handing out stickers, much like the ones voters receive at Election Day polls, as well as setting up selfie booths and encouraging people to share pictures online with various hashtags, such as #IGotTheShotNYC and #ImABigShot.As with any selfie, the trend leans into our desire to share positive moments in our lives, not to mention a certain self-promotional impulse. But the motivations behind vaccine selfies go far beyond that: It’s viewed as a way for the selfie-taker to signal to loved ones they are safe and vaccinated, a tool to broadcast being part of an exclusive group and a potential means to help dispel vaccine skepticism in others.For Kate Caudill, who works for the federal government on Covid relief loans and is a volunteer with the New York medical reserve corps at a vaccination pod, posting a selfie was important “to encourage others that I felt good and confident” after receiving a leftover dose at the end of a day in January. Likewise, Rachel Blades, a speech pathologist who works with adults and the elderly in Lexington, Kentucky, said she took a selfie after getting her first dose to help cut down on the spread of misinformation about the shot. “I shared as a way for people to see real people choosing to get the vaccine,” she said. (She also did so to honor the life of her grandfather who died in April from Covid-19.) A month later, Virtua Health became a health-care partner for one of New Jersey’s vaccine mega-sites and set up a similar station near the exit of the building. People who receive their vaccination can take photos on their way out and pose with handheld signs that say “I Got My COVID-19 Vaccine!” and “First Dose!” The facility requests people use antibacterial wipes when handling the paddles, he added.Moise, who likened the cheering and energy at the vaccine site to that of a rock concert, said the effort intends to provide people with a way to document the occasion without the privacy concerns associated with posting photos of their vaccination record card on social media. In February, the Better Business Bureau cautioned people to not share photos of their Covid-19 vaccine cards, which display sensitive personal information such as full names and birthdays, that could be obtained by scammers.”Our hope is that by posting a photo on social media, guests are encouraging their friends and family to follow their lead,” said Moise. “We know there are people who are hesitant to proceed with vaccination; perhaps seeing these celebratory photos of people they know and trust will reduce their reluctance — or at least open the door to conversation.”Although vaccine selfies can be a display of civic action, there’s an element of exclusivity, too. “In this case, it also has a feeling of status, as access to the vaccine is limited,” said Karen Kovacs North, professor of digital social media at University of Southern California’s Annenberg School.President Joe Biden said Tuesday the United States would have enough Covid-19 vaccine doses for every adult American by the end of May, dramatically accelerating his administration’s timeline. But challenges around the rollout of the vaccine persist. In some ways, Kovacs said, getting an appointment is reminiscent of invite-only sites, apps or private clubs that are hard to get into and require exclusive invitations.On the other hand, some people are conflicted with how public they should be about receiving a vaccine. Shira Gabriel Klaiman, an associate professor of psychology at the University of Buffalo, said a “very real negative” is that vaccine selfies are causing envy in people who haven’t gotten their shots yet.”Many people are reporting feeling jealous or even depressed when they see that other people are getting a shot and they don’t even know when they will be eligible,” Klaiman said. “This is exacerbated by the inequality in the way that the vaccine has been delivered. People who don’t have time to hunt down appointments may be envious when they see that others have them.”