Verizon Fios is the top gaming ISP among major US service providers while Iowa’s Cedar Falls Utilities (CFU) took the honors among all qualified ISPs, according to a new PCMag study that measured and emphasized latency and jitter performance rather than just raw speed. 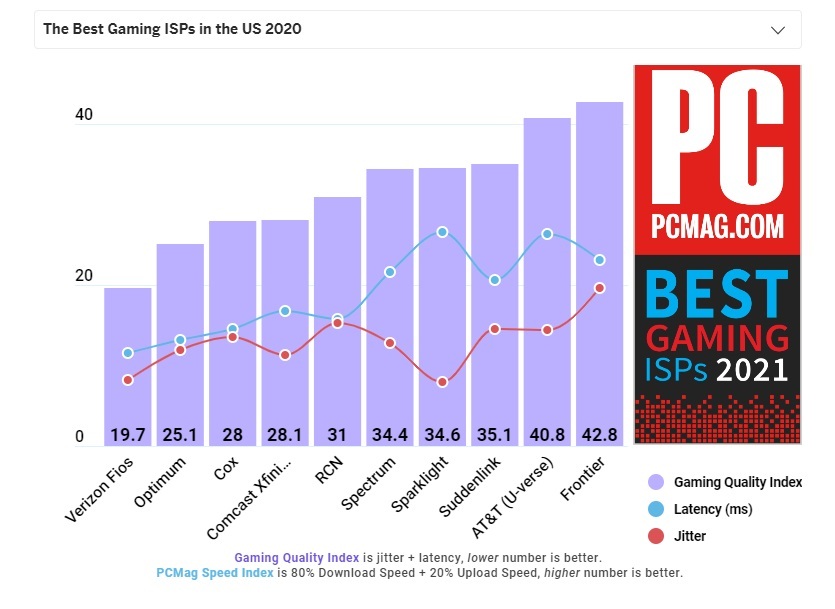 Though Verizon Fios’ Gaming Quality Index of 19.7 was tops among major ISPs, it lagged last year’s result of 16.9. With smaller, qualified ISPs included, Verizon Fios would’ve ranked No. 12 on the Gaming Quality Index. “But it’s certainly the best you’ll see from any ISP in this list with over 1 million customers,” PCMag noted.

Altice USA’s Gaming Quality Index results were a mixed bag. Its Optimum service area, which includes parts of New York, New Jersey and Connecticut and a growing number of areas in that footprint that have been upgraded to fiber-to-the-premises (FTTP), fared well in the study, while its more rural Suddenlink service area was at the bottom of the heap with AT&T (U-verse) and Frontier Communications.

US cable generally did well in the major ISP category. Cox Communications, which offers a premium, low-latency service called Elite Gamer, only trailed Verizon Fios and Altice USA/Optimum. CableOne/Sparklight’s results had the widest variance performing the best with jitter but the worst with respect to latency.

CFU topped PCMag’s broader ISP study with a Gaming Quality Index of 9.1, the best in the nation, followed by Empire Access and Hotwire. Summit Broadband, Comporium and GVTC Communication were at the bottom of US ISPs that made the cut. 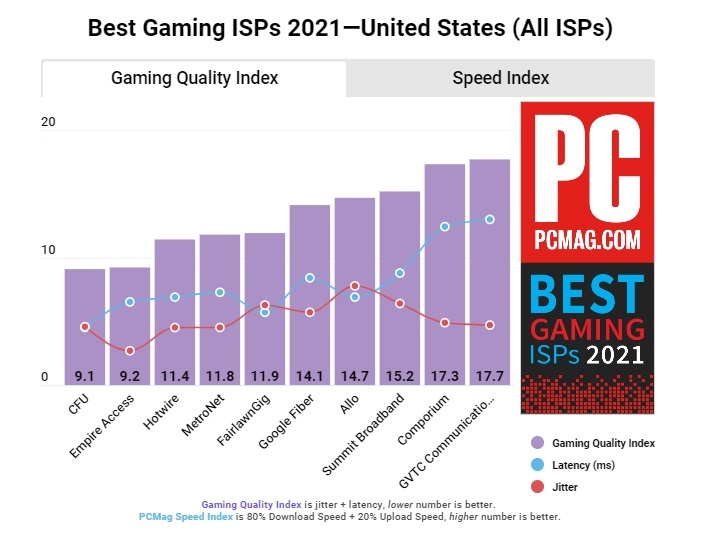 PCMag’s Gaming Quality Index factored in latency (measured in milliseconds) and jitter (a check of the consistency of the latency) of the connection being tested the lower the number the better the performance. “Adding the two provides a number for comparison,” PCMag explained in the study, which was based on tests conducted between December 1, 2019 and November 30, 2020.

PCMag said it used 280,777 US-based tests to quantify the results. ISPs not listed either did not have connections of a high-enough quality on average, or users and ISPs did not use the PCMag test tool often enough to be part of the mix. Notably, wireless ISPs seldom made the final results because “they’re not great for throughput or low-latency gaming,” the study noted.

The study results enter the picture as low latency starts to become a greater focus of cable operators and ISPs as they pursue features and capabilities that extend beyond speed and pricing.

The cable industry is taking aim at this with new low-latency technologies baked into DOCSIS 3.1 as well as DOCSIS 4.0, a new specification that supports low latency, enhanced security and multi-gigabit speeds. The industry’s broader “10G” initiative has similar aims for deployments of multiple access network technologies, including hybrid fiber/coax (HFC), FTTP and even wireless.

Cox has already taken things a step further with its Elite Gamer service, which is being packaged with a Panorama-branded whole-home Wi-Fi service that relies on a Cox-supplied gateway, or for $6.99 per month on a standalone basis for broadband customers who own their own modems.

PCMag’s study also tabulated and presented its list of the nation’s fastest ISPs.

That portion of the study, which also took advantage of the PCMag Speed Test tool, found that Verizon Fios was also tops among major ISPs, outpacing Altice USA/Optimum, Cox and Comcast. Per usual, the study exposed the asymmetrical nature of HFC networks, which are starting to remedy that shortcoming with “mid-splits” and “high-splits” that dedicate more spectrum and capacity to the DOCSIS network upstream. 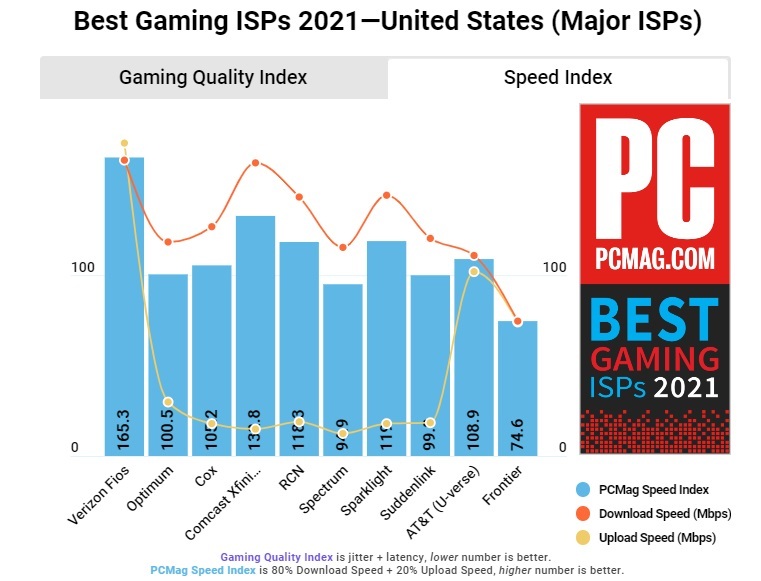 Speeds delivered by CFU also topped PCMag’s tally of all US ISPs, followed by Empire Access and Hotwire. 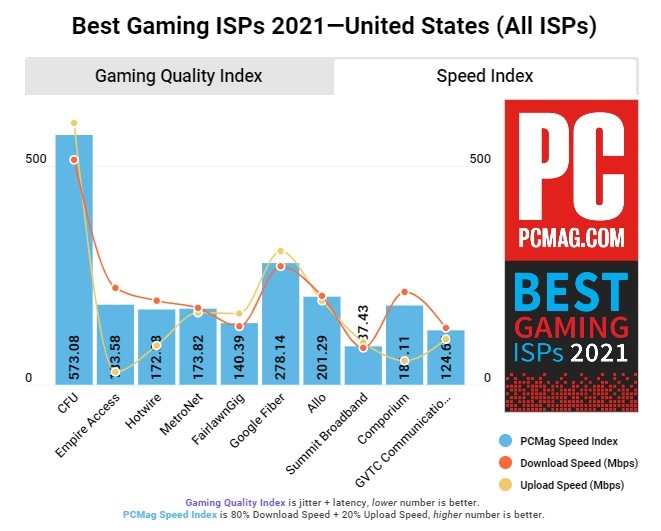