And his general tone on the topic appeared to signal Verizon’s disinterest in taking emergency steps to increase its wireless network capacity.

In the company’s quarterly presentation to investors, Verizon offered a look at its wireless network capacity. The figures do not include the addition of spectrum Verizon borrowed from companies tied to Dish Network. Click here for a larger version of this image.
(Source: Verizon)

Verizon reported that traffic on its wireless network rose only 9% due to the pandemic. That figure dovetails with other findings showing that major traffic increases related to COVID-19 occurred mostly on wired networks and not wireless networks. 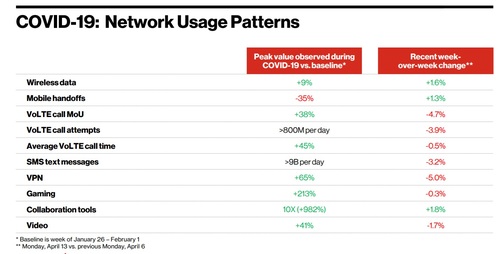 Verizon offered a look at the COVID-19 impact on its network. Click here for a larger version of this image.
(Source: Verizon)

At the outset of the pandemic, Verizon and several other wireless network operators took the unprecedented step to temporarily borrow spectrum for any anticipated traffic spikes. “Nobody knew how the usage would be on the network,” Verizon’s Vestberg explained.

However, Vestberg indicated that Verizon may not follow T-Mobile’s lead by formalizing those short-term loans into long-term leases. When questioned on the topic, Vestberg didn’t answer the question directly but noted that Verizon already has “headroom” on its network, adding that “I think we have a very good spectrum strategy.”

Vestberg was also asked whether Verizon would purchase spectrum from Ligado. “We are seeing a little bit more of a headwind on that than anything else on that,” he responded, noting the spectrum is not used anywhere else in the world, thus making it difficult to deploy.

Finally, Vestberg said that Verizon’s 5G buildout strategy remains on track despite COVID-19. He said the company continues to expect to light up 5G in millimeter wave (mmWave) spectrum in an additional 30 cities this year, and to turn on five times more small cell sites in 2020 than it did last year. He also said the operator expects to turn on Dynamic Spectrum Sharing (DSS) this year, which would allow Verizon to transmit 5G signals in a variety of spectrum bands on a nationwide basis.

“Verizon could have a critical 5G marketing advantage when the iPhone launches later this year thanks to the combination of two key wireless technologies developed by Qualcomm,” wrote the Wall Street analysts at Lightshed partners recently in discussing Verizon’s use of DSS and carrier aggregation. “We still have concerns about the limited amount of spectrum Verizon has available to fuel the persistent growth in wireless data. However, we recognize that the stars are aligning for it to once again lean heavily on its reputation as a superior network just as the Covid-induced, pent-up demand for smartphones is about to be unleashed.”