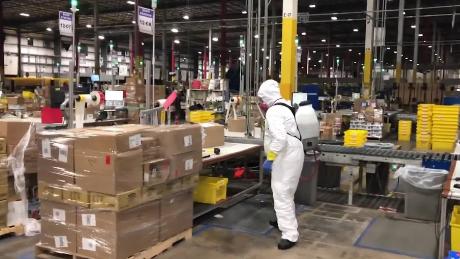 The complaint, filed Wednesday by three Amazon workers at its JFK8 warehouse, alleges the company has erected a “a façade of compliance” to meet public health guidelines while simultaneously pressuring employees to report to work under unsafe conditions. The result is that while “most New Yorkers have remained safe by complying with the state’s stay-at-home order … for JFK8 workers and their families, home has been a place of danger,” the complaint said.”We are saddened by the tragic impact COVID-19 has had on communities across the globe, including on some Amazon team members and their family and friends,” Rachael Lighty, an Amazon spokesperson, said in a statement to CNN Business. “From early March to May 1, we offered our employees unlimited time away from work, and since May 1 we have offered leave for those most vulnerable or who need to care for children or family members”Barbara Chandler was among the first confirmed cases of coronavirus at JFK8, according to the complaint. After she began experiencing symptoms, the virus allegedly moved on to other members of her household — including her oldest son as well as her cousin. After falling ill with Covid-19, according to the complaint, Chandler’s cousin was later found dead in the family’s bathroom.For Amazon, the lawsuit is the latest in a series of accusations that it has not done enough to safeguard its workforce during the pandemic. Amazon has declined requests for information on the total number of confirmed cases in its workforce, arguing the data would not be useful. To date, the company has confirmed the deaths of nine workers due to Covid-19 across its US facilities, including one who worked at JFK8. “We are deeply saddened by the loss of an associate at our site in Staten Island, NY,” Amazon said at the time. “His family and loved ones are in our thoughts, and we are supporting his fellow colleagues.” In recent months, Amazon has said it’s tripled the amount of cleaning it performs in facilities, and made masks and hand sanitizer more available. It has also committed to making and distributing tens of thousands of plastic face shields to its employees, to health care workers and the general public. It has said it’s made more than 150 “process changes” to its operations to enhance safety.Amazon’s Lighty said the company has “invested $4 billion from April to June on COVID-related initiatives, including over $800 million in the first half of this year on safety measures like temperature checks, masks, gloves, enhanced cleaning and sanitization, extended pay and benefits options, testing, and more. This includes two weeks paid leave for any COVID diagnosis or quarantine.”But employees have complained of rationed hand sanitizer, insufficient quarantine leave policies and work expectations that make it impossible to maintain social distancing. Those who have sought paid pandemic leave, like Chandler, say it’s taken them far too long to receive the benefit. And, according to the complaint, the extra pay is a fraction of what Amazon actually owes Chandler under its paid leave policy. The complaint seeks a court order forcing Amazon to expand its leave policy, as well as to hand off its internal contact tracing efforts to a qualified third party. In addition, it calls for Amazon to grant workers additional free time during shifts so that they may wash their hands. The suit was filed in the US District Court for the Eastern District of New York, with the help of three legal groups: Towards Justice, Public Justice and Make the Road New York.