For enterprise IT managers requiring more flexible, open, secure and cloud-based wide area networking instead of specialized Wide Area Network (WAN) technologies, SD-WAN is the best option. FiberGuide is a one stop shop for SD-WAN solutions from multiple providers. Contact us or visit our GeoQuote page to request a list of providers and pricing plans that meet your requirements. You may also contact us to arrange a demonstration.

Some of our SD-WAN providers include:

SD-WAN (Software Defined WAN) is the application of Software Defined Networking (SDN) to Wide
Area Networks (WAN). It moves the control of the network from hardware to the cloud, thereby simplifying and centralizing network management.

SD-WAN is an extension of software defined networking (SDN) and is used to automate the management of wide area networks. SDN is a network management approach that separates the control plane (the logic deciding how to handle traffic) from the data plane which forwards the traffic.
The SDN controllers manage the WAN access solutions such as MPLS, DSL, 4G, private lines or even satellite broadband. SDN decides on the access resource to send traffic depending on the requirements of the traffic at any given point in time. Critical applications such as VoIP and video conferencing will be given higher priority over the best performing paths. This way, SDN is creating service classes to prioritize traffic in a way that is not possible over the public Internet, thereby improving QoS.

SD-WAN also comes with security that makes wide area networking over the Internet significantly more secure. There is an ongoing debate on whether enterprises should abandon the relatively costly MPLS networks and migrate completely to SD-WAN using the inexpensive public Internet. While many have taken full advantage of the SD-WAN innovation, most enterprises still insist on using private network paths at least for the most sensitive of their traffic.
Today’s wide area networks employ SD-WAN to support the ever-increasing number of enterprise applications. In traditional WAN, when-ever there are constraints in the network, the solution is to increase bandwidth. With SD-WAN, network constraints can be addressed by prioritizing mission critical applications using hybrid WAN.

A hybrid WAN combines two or more wide area networks to connect geographically dispersed locations. As IT managers face increased demands for bandwidth, simply adding MPLS bandwidth can be a very costly proposition. The solution is to augment MPLS with less expensive connectivity such as the public Internet and 4G/LTE. Sensitive traffic or traffic requiring QoS can be routed over the private MPLS network while the rest of the of the traffic is transmitted over the less expensive options.

Hybrid WAN is usually associated with but is not identical to SD-WAN. 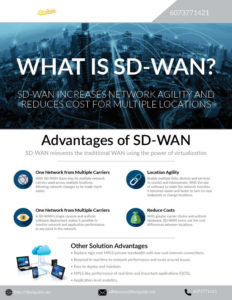