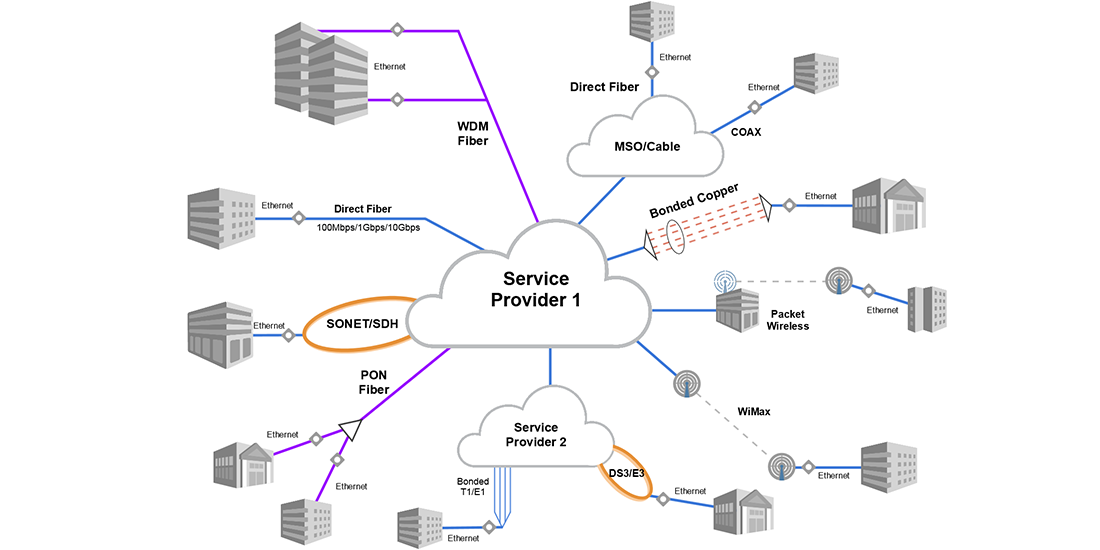 As cloud services, medical imaging, video streaming, and other bandwidth hungry applications continue to drive requirements for faster and cost-effective networks, Ethernet has become a technology of choice for many businesses and institutions. Although Ethernet was initially developed for short reach Local Area Network (LAN) applications, it has been extended to cover Wide Area Network (WAN) applications. This article focuses on how off-net subscribers access Ethernet WAN or carrier Ethernet services.

Ethernet was first developed for Local Area Networking for modest data rates over coaxial copper cable. In fact, when Bob Metcalfe invented the technology in 1973, he was interested in connecting hundreds of different computers and also to drive the laser printer that had just been invented.

An EPL is a point-to-point private data connection with which the subscriber can securely connect two sites. EPL is increasingly becoming an alternative to older forms of leased lines such as E1/T1 because of the much higher bandwidth, lower cost per bit and the other advantages of Ethernet mentioned above. Applications of EPL include the connection of two enterprise locations such as an enterprise headquarters and its branch office or dedicated and symmetric high speed connection to the Internet.

An EVPL is a point to multipoint service configured to connect three or more sites. EVPL service helps businesses connect their headquarters to geographically dispersed locations such as data centers and remote offices. As an example, Limelight Networks delivers content from Los Angeles to several locations in Australia over Telstra’s EVPL service.

VPLS connects geographically dispersed physical LANS into a seamless single LAN. In an Ethernet VLAN, Ethernet devices communicate with each other as if they were on a single LAN. As an example, the University of Law (UK) resorted to using a VPLS from SSE to support researchers, students and lecturers at its sites in Birmingham, Bristol, Chester, Guildford, London Bloomsbury, London Moorgate, Manchester and York. The VPLS enabled University staff and students to communicate as if they were all at the same campus.

For those in the market for carrier Ethernet services, the first item on the service procurement agenda is determining whether the buildings at the locations of interest are directly connected to providers’ carrier Ethernet networks.  In other words, are the buildings on-net? A number of free online tools, such as GeoQuote, are available to search network providers connected to any given building, at least in the United States.

If a building is on-net, the installation process is relatively painless and involves the connection and configuration of an Ethernet User Interface (UNI). To read more about UNI, point your browser to the article, Business Ethernet Services: Questions To Ask Before Leasing.

While most providers will endeavor to connect as many commercial buildings as possible, some buildings may not yet be connected or they are out of reach of a carrier Ethernet footprint. These buildings (3 in 4 of all commercial buildings) are off-net. Off-net buildings may be connected using a third party Ethernet over Fiber transport solution, Ethernet over Copper in the local loop and other transport solutions, such as Ethernet over OTN (beyond the scope of this article). Subscribers can also connect to a provider’s carrier Ethernet network through a retailer purchasing services from the provider.

The Ethernet over Fiber off-net transport option offers the most bandwidth, flexibility and reach. Typical bandwidth ranges from 10 Mbps to 10 Gbps with 100 Gbps possible in some markets. Distances of 80km from the customer location to the Ethernet point presence are possible.  Because of the investment required, this option is more suited for large Enterprise buildings, educational institutions, medical centers, National Research and Education Networks (NRENS), government departments and wholesale providers.

In addition to the above standards, typically used in a point to point configuration, IEEE has defined Ethernet Passive Optical Network (EPON) standards for point to multipoint deployments of Ethernet in the last mile (or first mile from the subscriber point of view). EPON or GEPON and 10G-EPON standards define the transmission of 1.25 Gbps and 10 Gbps over passive optical networks.

Notwithstanding the mushrooming of third part off-net fiber optic transport providers and the adaption of Ethernet over Fiber technologies by a large number of MSOs – there is just not enough fiber to connect all the businesses who want to take advantage of carrier Ethernet services. Moreover, for the small business requiring sub-gigabit bandwidth and without the deep pockets to afford Ethernet over Fiber, other options are required.

For businesses requiring access to carrier Ethernet services of up to 50 Mbps, EoC is a viable option. Ethernet over Copper is a version of Ethernet technology transmitted over voice grade twisted copper pairs in the local loop – from the customer premises to the provider’s central office. Unlike DSL that can be transmitted over the same voice line, an EoC line exclusively transport Ethernet packets.

Unlike the LAN version of Ethernet conforming to the IEEE standards XBase-T (where X denotes the data rate), Ethernet over Copper or Ethernet in the last mile, was developed for transmission over longer distances of up to 2.7km. The corresponding IEEE standards for EoC are 2BASE-TL/2PASS-TL and 10PASS-TS-DMT/10PASS-TS-QAM defining the transmission of 10 Mbps over 750m and 2 Mbps over a distance of 2.7km.\

The bandwidth of EoC can be increased by bonding or transmitting signals over multiple copper pairs. Local loop providers can offer data rates of 100 Mbps at significantly lower cost/bit compared to T1 lines.

The MEF E-Access standard enables transit providers to seamlessly connect their networks with an Ethernet provider, thereby extending the provider’s carrier Ethernet network beyond the footprint. The two networks are connected together by a Network to Network Interface (NNI).

How can FiberGuide support your search for carrier Ethernet services?

Through GeoQuote, a one stop carrier services research tool, FiberGuide can help you research whether your building is on-net and competitive service pricing. In the event that your building is off-net, we will find different options for connecting you to the nearest carrier Ethernet services provider.

In addition to narrowing down your options and providing you with guaranteed best pricing, FiberGuide will also work with you through provisioning and beyond implementation. In other words, in addition to having a direct relationship with the carrier, FiberGuide will remain as an ongoing resource to help you with any questions or issues you may have with your selected carrier, as well as provide you with support.