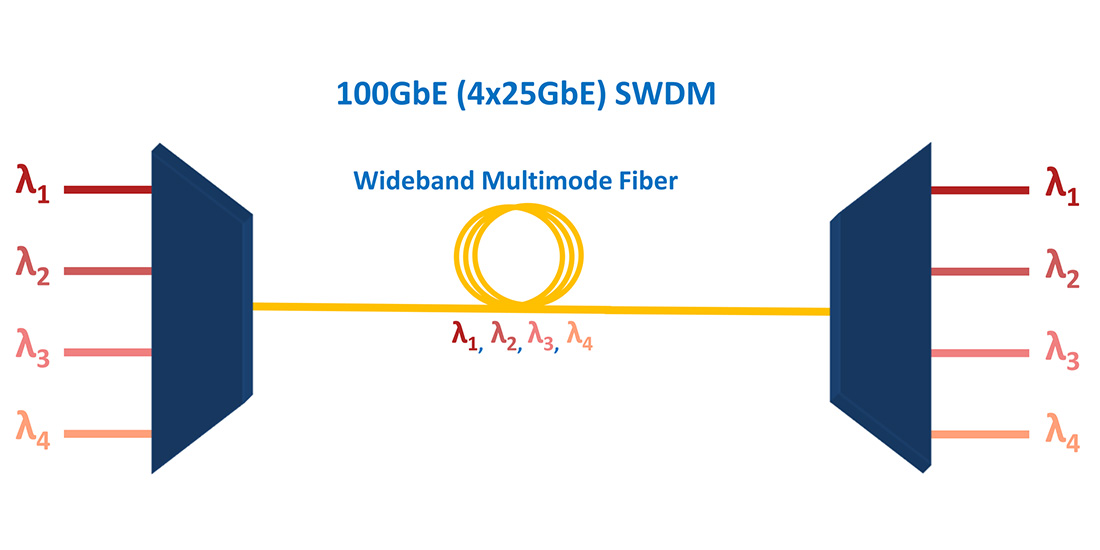 22 Aug A Summary of SWDM

Posted at 14:39h in Uncategorized by Jabulani Dhliwayo 0 Comments
Share

The continued growth in high bandwidth applications and the population that uses them drives the need for higher data rates in all segments of optical networks–including data centers, local area networks, optical backplanes, and other short reach applications. Many data center operators are already upgrading their data center connection technologies from 10Gbps and 40Gbps to 25Gbps and 100Gbps. SWDM is one of the latest technologies adapted to boost data rates in short reach applications. In this article, a summary of some of the key aspects of SWDM technology, including its advantages and the type of optical fiber required to enable it are presented.

Shortwave wavelength division multiplexing (SWDM) is a technology that uses multiple wavelengths at the shorter wavelength end of the fiber optic spectrum, around 850nm, in a single multimode fiber (MMF). In other words, the same well know CWDM technology is applied to short reach MMF systems.

The cost effectiveness of MMF based systems in short reach applications is enabled by low cost vertical-cavity surface emitting lasers (VCSELs) which operate at 850nm. Unfortunately, VCSELs are prone to modulation challenges making it difficult to modulate them fast enough to transmit high data rate signals. Although work is in progress to develop a 50Gbps standard, the highest standardized single channel data rate for MMF systems to date is 25Gbps (IEEE P802.3by).

There are a few challenges to parallel optics implementation of 40G and 100G MMF systems and they include:

Laser optimized cables OM3 and OM4 are optimized for transmission at one wavelength of 850nm. A new fiber standard, TIA-492AAAE WideBand MMF, requiring the specification of effective modal bandwidth (EMB) and attenuation at 953nm in addition to 850nm was published in 2016. Guaranteeing bandwidth performance at 850nm and 953nm ensures adequate bandwidth at all wavelengths of interest for SWDM.

ISO/IEC 11801 chose OM5 as the official designation for cabling containing the WideBand MMF.