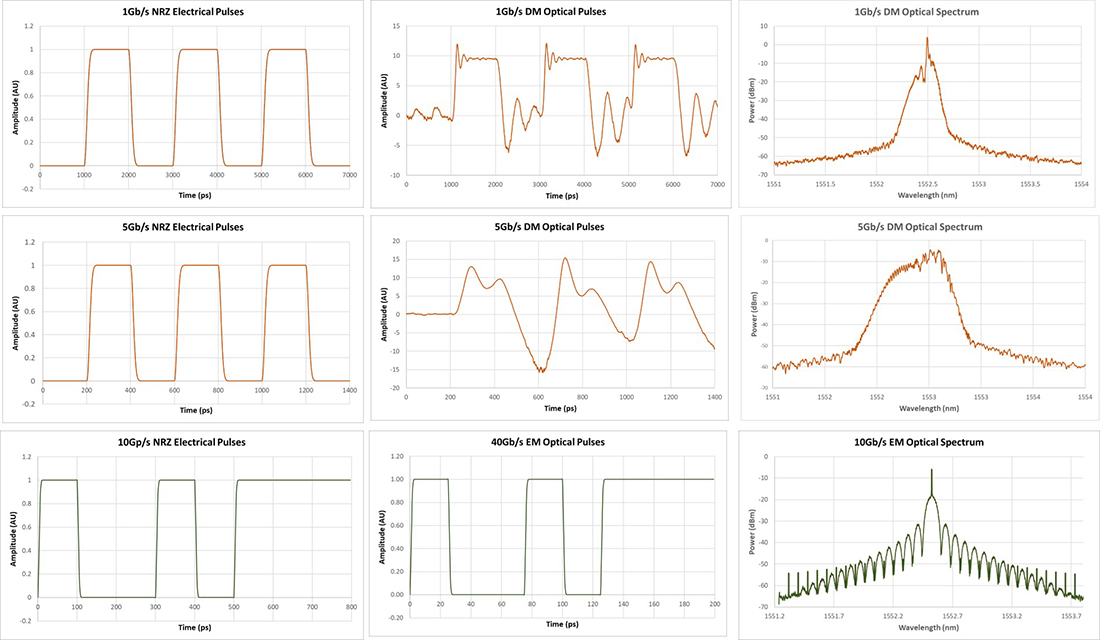 The spectrum of a light source has a profound impact on the performance of an optical communication network. For high performance networks, the spectral width should be as narrow as possible, and the center wavelength should be stable and not drift over time. Moreover, the modulation required to encode an electrical signal on an optical carrier wave has an impact on the spectral characteristics of the light. Simulation software, such as Optisystem, is a cost-effective way of testing and studying optical properties under different modulation conditions. In this article, Optisystem simulation tools are used to demonstrate the effect of direct and external NRZ intensity modulation on optical pulses and spectra of laser diodes.

Modulation controls one or more properties of light in order to encode signals on optical carrier waves that will then transmit the signal across a network. The light properties that can be modulated include intensity, phase, frequency, or a combination of two or more of these properties. The focus here is on the modulation of the intensity or power of the light. Turning laser light on and off or On Off Keying (OOK) is the simplest modulation format used to encode digital signals in optical communications. In this modulation format, the “on” state represents a binary 1 and the “off” state represents a binary 0.

The Optisystem optical simulation software, described in our simulation video, is loaded with tools to simulate optical components, subsystems and networks. In this article, only a small subset of the simulation tools relevant to the spectral characteristics of modulated light are reviewed. The tools used in these simulations include the user defined bit sequence generator, pseudo random bit sequence (PRBS) generator, NRZ pulse generator, directly modulated laser diode, CW (Continuous Wave) laser, a Mach-Zander modulator, an oscilloscope, an optical time domain visualizer and an optical spectrum analyzer.

The user defined bit sequence generator is used to form deterministic binary sequences of 1s and 0s. The user can either manually enter a binary sequence or select a predefined function to generate the preferred sequence. One key input to this tool is the bit rate, which can be set locally in the component or as a global parameter affecting the entire project.

Like the user defined bit sequence generator, the PRBS is used to form binary sequences of 1s and 0s. However, the PRBS generates a random sequence of binary 1s and 0s. Pseudo random bit sequences are used to test digital systems with the understanding that if random digital sequences can be transmitted through the system without errors, then a deterministic digital sequence can also be transmitted through the same system without errors. In optical simulation, the pseudo random bit sequence is used in lieu of a digital signal to be transmitted in the network. It impacts the light source spectrum in the same way as a deterministic signal and represents the worst-case scenario as far as system errors are concerned.

The Optisystem PRBS generator can be configured by adjusting a number global and specific component parameters such as the bit rate, Mark probability (or the probability of generating a 1) and a random number seed. A constant seed will generate the same bit sequence every time the program is executed while a random seed will generate a different sequence each time the program is run.

The NRZ pulse generator takes a binary sequence from the PRBS or user defined bit sequence generator as input and forms a corresponding NRZ electrical pulse train used to modulate the light. The user can set the generator rise/fall times and maximum and minimum amplitude in arbitrary units. The generated pulse can be viewed on an oscilloscope, one of the electrical visualizer tools available in the library.

Directly modulated laser diode
The directly modulated laser diode is equipped with an input for an electrical modulating pulse, the NRZ pulse generator in our case. Key input parameters include center frequency, bias current and modulation peak current which should be set correctly to obtain reasonable simulation results. In addition, there is a large number of parameters associated with the Physics of laser diodes such as group velocity, quantum efficiency, photon lifetime and carrier lifetime. However, most of the default values in the tool are applicable to most simulations.

The Mach-Zehnder modulator is used as an external modulator to mitigate against the challenges of direct modulation. The CW laser is kept on and the function of turning the laser light on and off is performed by the modulator.

The oscilloscope, one of the electric visualizers in the Optisystem library, displays varying voltage signals as a function of time. The oscilloscope is used in this project to view NRZ electric pulses.

The optical time domain visualizer is an optical equivalence of an oscilloscope. It displays optical signal power as a function of time and is used in this project to compare modulated optical pulses to the original NRZ electrical pulses.

Direct modulation is the simplest and least expensive form of light modulation because it only requires a signal generator connected directly to the light source. Modulation is accomplished by controlling the laser diode current. By driving the current to defined minimum and maximum values, the output optical power can be switched on and off.

Figure 1 shows an Optisystem optical simulation layout to demonstrate the direct modulation of a laser diode which is set at a center frequency of 193.1Thz (or 1552.5nm). In this setup, a user defined bit sequence generator is used and configured to generate a binary sequence of alternating 1s and 0s. The binary sequence is used as input to an NRZ pulse generator which drives the laser current to form a corresponding optical pulse train. The oscilloscope monitors the NRZ generator output while the optical time domain visualizer is used to monitor the optical pulses. The optical spectrum analyzer is used to monitor the optical spectrum. The project is executed for 1Gb/s and 5Gb/s data rates and the electrical and optical data points are exported to an excel sheet for analysis.

Figures 2a through 2c summarize the results of the simulation at a data rate of 1Gb/s and show the first 8 bits of a 512-bit NRZ electric pulse sequence(a), corresponding optical pulses(b) and the optical spectrum (c). As shown, the optical pulses are modulated and distorted, showing an overshoot at the proximal end of each pulse. This is a manifestation of chirp in the pulse, defined as the time dependence of the instantaneous frequency of the pulse. Modulating the laser changes carrier concentration which in turn changes the refractive index of the active region of the laser diode and consequently, results in frequency shift. Moreover, the spectrum is broadened significantly compared to the original spectral width of 10Mhz.

When the data rate increases to 5Gb/s (Figures 3a through 3c), the pulse distortion worsens and the spectral width increases. When coupled with the group dispersion of the transmission optical fiber, these distortions and spectral broadening severely limit the data rate and the maximum transmission distance. As a result, direct modulated lasers are only used for low data rates or short distances in optical communication systems.

To mitigate against the shortcomings of direct modulation at high data rates, external modulation is used as an alternative. Figure 4 is an optical simulation setup for an external modulated laser. In this arrangement, the NRZ generator drives the Mach-Zender modulator which in turn modulates the light from the CW laser. The key laser parameters are set to the following values:
Center wavelength – 193.1Thz
Line width – 10Mhz
Output power – 0dBm
A detailed step by step process for setting up an external modulated laser project can be found in Optiwave’s tutorial: Lesson 1: Transmitter — External Modulated Laser 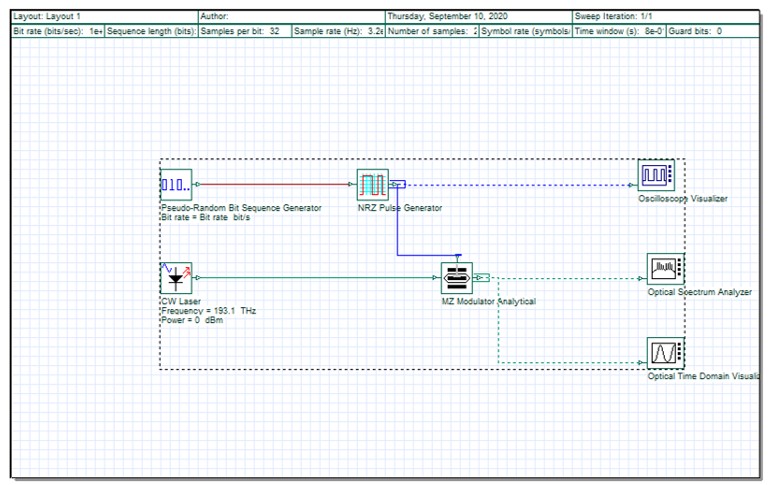 Figure 5 shows results of the optical simulation when the data rate is set to 10Gb/s. The results include the first 8 bits of a 512-bit electrical NRZ pulse sequence(a), a corresponding optical pulse (b) and the optical spectrum (c). Unlike in the case of the directly modulated laser, there is no obvious distortion in the optical pulses. Moreover, the spectrum at 10Gb/s is much narrower than the 1Gb/s spectrum in the case of direct modulation. External modulation manifests itself in the shape of the spectrum which corresponds to the mathematical transformation of a rectangular pulse into its frequency domain. In other words, the optical spectrum approximates to the Fourier transform of the NRZ rectangular pulses. The bandwidth of the modulated light can be estimated from the time-bandwidth product defined as ΔtΔν ≥ C, where Δt is the pulse duration or pulse width, Δν is the frequency bandwidth and C is a constant, the lower limit of the time-bandwidth product. Assuming that C=1, then ΔtΔν ≥ 1, which is sometimes referred to as the uncertainty principle. In other words, the bandwidth is greater or equal to the reciprocal of the pulse duration.

It follows that for a data rate of 10Gb/s, the pulse width is 100ps and the bandwidth is at least 10Ghz. When the data rate is increased to 40Gb/s, then the pulse duration is 25ps and the bandwidth increases to at least 40Ghz. The key take-away, for the intend and purpose of this article, is that the higher the data rate, the shorter the pulse duration and the wider is the spectrum. The Actual definition of bandwidth or spectral width varies and is oftentimes defined as the full width at half maximum or 3dB width and may differ from the values given here. However, the key point remains that the smaller the pulse duration, the wider the spectral width – whatever the definition.

As mentioned earlier, when coupled with the group dispersion of the fiber, high data rates will limit transmission distances in optical communication systems. Moreover, wide spectra reduce spectral efficiency and the number of DWDM (Dense Wavelength Division Multiplexing) channels that can be transmitted in an optical fiber. This is also addressed in greater detail in our OTT optical network training classes.