Laser diodes play an important role in most optical communications, from short reach premises and data center applications to ultra-long-haul terrestrial networks and transoceanic submarine systems. Building from the operation of the light emitting diode (LED), enhancements that are required to transform an LED into a laser diode are discussed. Although the focus of the article is on how the Fabry Perot laser works, other types of laser diodes are also briefly described. At the end of the article, you should be able to describe how stimulated emission and amplification are achieved in laser diodes and be familiar with such terms as light absorption, spontaneous emission, stimulated emission, population inversion, gain and the longitudinal modes of a Fabry Perot laser. In addition, you should become familiar with common types of semiconductor lasers used in optical networking and their important properties.

Recall from the light emitting diode article that the electron and hole combination process in the depletion region of the PN-junction can best be described by energy level diagrams as shown below. When energy is applied to an electron in the form of a forward biasing voltage, it can get excited into the higher energy level conduction band. When it eventually falls back to the conduction band, it releases energy equal to the energy difference between the energy bands. The released energy manifests itself in the form of a photon of light. Such release of a photon is termed spontaneous emission.

In addition to a forward biased voltage, another source of energy capable of exciting an electron to the higher conduction band is a photon of light. If a photon is in the compound semiconductor material, it can transfer its energy to an electron and propel the electron into the conduction band. In this process, we have absorption as the energy of the photon is absorbed by the electron.  Note that if the excited electron eventually falls back to the valence band, it will also give out energy in the form a photon and the process is still spontaneous emission.

A special case, and a very important case in lasers, occurs when a photon passes by an electron that is already excited and is in the conduction band. Because the electron is already at a higher energy level, or higher potential, it only takes an infinitesimal amount of energy from the photon to trigger its downfall. This is analogous to a small force from a mild wind bringing down a giant standing at the edge of a cliff. Because only a tiny amount of energy is required, the photon can cause the electron to fall to the valence band without the photon itself losing any appreciable amount of energy. This stimulated emission process results in two identical photons, the original incident photon, and a new generated photon. For a more quantitative treatment of stimulated emission, listen to the lecture on Einstein’s Argument: the Need for Spontaneous Emission.

As indicated in the LED article, electrons prefer to be in the lower valence band than in higher energy states. Under normal equilibrium conditions, the statistical distribution of electrons is such that the overwhelming number of them are in the ground energy state with only a small percentage in the excited state. Pumping is the process of exciting more electrons to the conduction band for lasing to occur and can be achieved by applying a forward biased voltage in the case of laser diodes. When a certain voltage threshold is applied to the PN-junction, there will be more excited electrons in the conduction band than in the lower valence band – a process known as population inversion. Pumping can also be achieved by the absorption of pump light in certain optically pumped lasers. But even in the case of electrical pumped lasers, such as the laser diodes under discussion, some emitted light may be absorbed by electrons and contribute to population inversion. For more in depth understanding of the process of population inversion refer to a description of Fermi-Dirac statistics.

Population inversion ensures that there is an abundance of excited electrons that will emit light, thereby resulting in amplification. Once two photons emerge from a single stimulated event, they too may each trigger a stimulation event resulting in a total of four photons and the four photons give rise to eight and so on. Thus, a single spontaneously emitted photon can trigger a domino effect of stimulated emissions leading to an intense beam of light. This is the amplification process associated with the gain of the compound semiconductor medium. More on amplification later after we look at the implementation of a simple laser diode.

The figure below shows the implementation of the simplest form of a laser diode, the Fabry Perot laser diode. The laser diode is engineered to meet certain requirements well beyond the requirements of an LED.

Reflective surfaces – The laser diode is designed to allow some light to escape through one end of the active region while allowing a percentage of the light to loop back into the active region to boost the intensity of the light or to contribute to population inversion by exciting more electrons. To achieve this, one end of the region is coated with a reflective material while the other is coated with a partially reflective coating material. 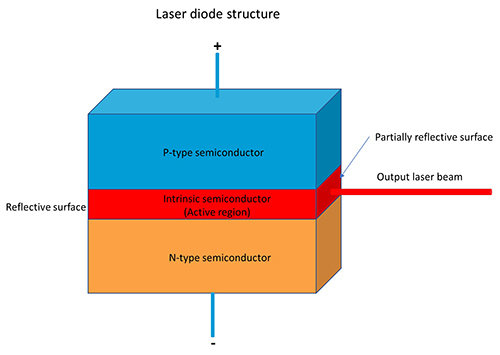 The above arrangement forms a Fabry Perot resonator capable of forming standing waves of light trapped inside the resonator. A standing wave is the result of the superposition of two waves of equal (or almost equal) amplitude and phase traveling in opposite directions. This follows from the phenomenon of interference where two monochromatic waves that are in phase will add up to give a more intense wave. If the waves are traveling in the same direction, they give rise to a more intense traveling wave and if they are traveling in opposite directions, they result in an oscillating wave fixed in space as shown in the figure  below. The standing waves must have nodes at the reflective surfaces of the cavity.

For the standing wave to occur, a condition for lasing, the separation of the reflective surfaces must be equal to an integral multiple of half the wavelength of the light. In other words, L = qλ/2, where L is the separation of the surfaces (or cavity length), q is an integer, and λ is the wavelength. q is the mode number and for q =1, only half a wave forms a standing wave, for q = 2 one full wave forms a standing wave and so on up to q=n, where n can be a very large number. 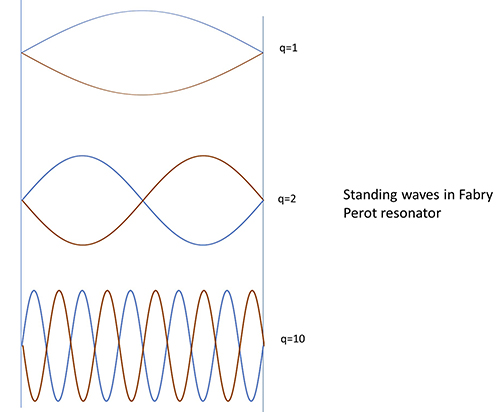 In an ideal resonator an infinite number of such modes is possible. The spectrum (intensity vs wavelength) of the Fabry Perot resonator is a large number of peaks with width that is inversely proportional to the reflectivity of the surfaces. That is, the higher the reflectivity, the narrower the intensity peaks.

However, in a Fabry Perot laser the number of allowed modes or intensity peaks are limited. The spectrum of the output laser light is a superposition of the medium gain spectrum and the spectrum of the Fabry Perot resonator. In other words, for a wavelength to lase, it must meet the Fabry Perot resonator condition and must lie within the medium gain spectrum. The gain spectrum depends on the compound semiconductor material used and may resemble the spectrum of the light emitting diode discussed in the previous article. An additional condition is that the gain should be greater than the loss experienced by the light. The loss includes absorption, scattering and the loss at the reflective interfaces. These losses result in a significantly narrower laser linewidth (~1nm) compared to that of an LED (~50nm). 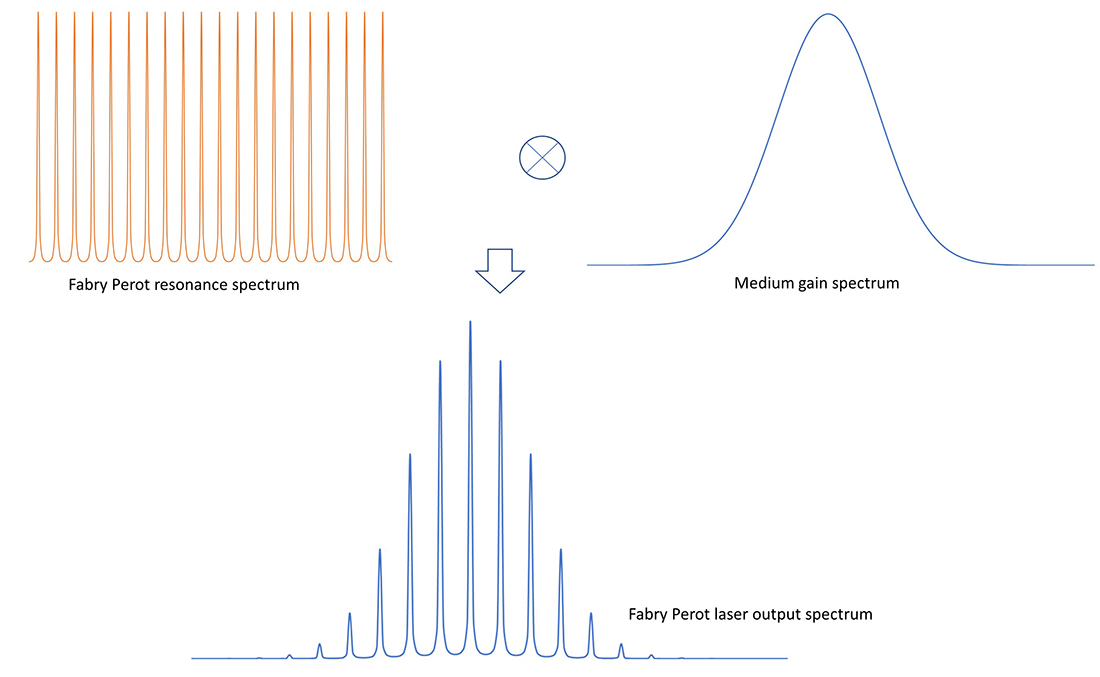 Like all lasers, a Fabry Perot diode laser has several advantages over light emitting diodes in optical communication networks:

Despite their short comings, Fabry Perot lasers are commonly used in moderate range applications such as in access networks, including fiber to the home, and metropolitan area networks.

Other laser diodes in optical networking

Distributed feedback laser diodes – In a distributed feedback laser, a grating is included in the Fabry Perot active region. The grating is designed to reflect only a selected wavelength back into the active region while the other wavelengths are scattered and absorbed. This results in the suppression of all side modes in favor of one dominant wavelength. The typical linewidth of a DFB laser is 1-10MHz compared to ~1nm (15-20GHz) for a Fabry Perot laser.

External cavity laser (ECL)– in an external cavity laser, a reflector is included outside the gain medium or the active region. This has the impact of elongating the laser cavity which can support only one mode while suppressing the rest. Moreover, by adjusting the properties of the reflector, the ECL can be used as tunable laser.

Vertical-Cavity Surface-Emitting Lasers (VCSEL) – Unlike the edge emitting laser diodes discussed so far, the VCSEL emits light along the direction of the bias current. While their line width is much wider than the lasers discussed so far, VCSELs are easy and inexpensive to make. Their performance is much superior to that of LEDs and they are replacing LEDs in short distance applications.

The interaction of multiple processes including spontaneous emission, stimulated emission, absorption, and interference ultimately determines the output of a laser diode. While their operation is an extension of the operation of the light emitting diodes, laser diodes offer far superior performance with properties that make high performance optical networking possible. Different types of laser diodes are used in different applications – from short reach to ultra-long-distance networks.

More topics in optical networking, such as dispersion, DWDM and light are covered in detail in our fiber optic training classes.