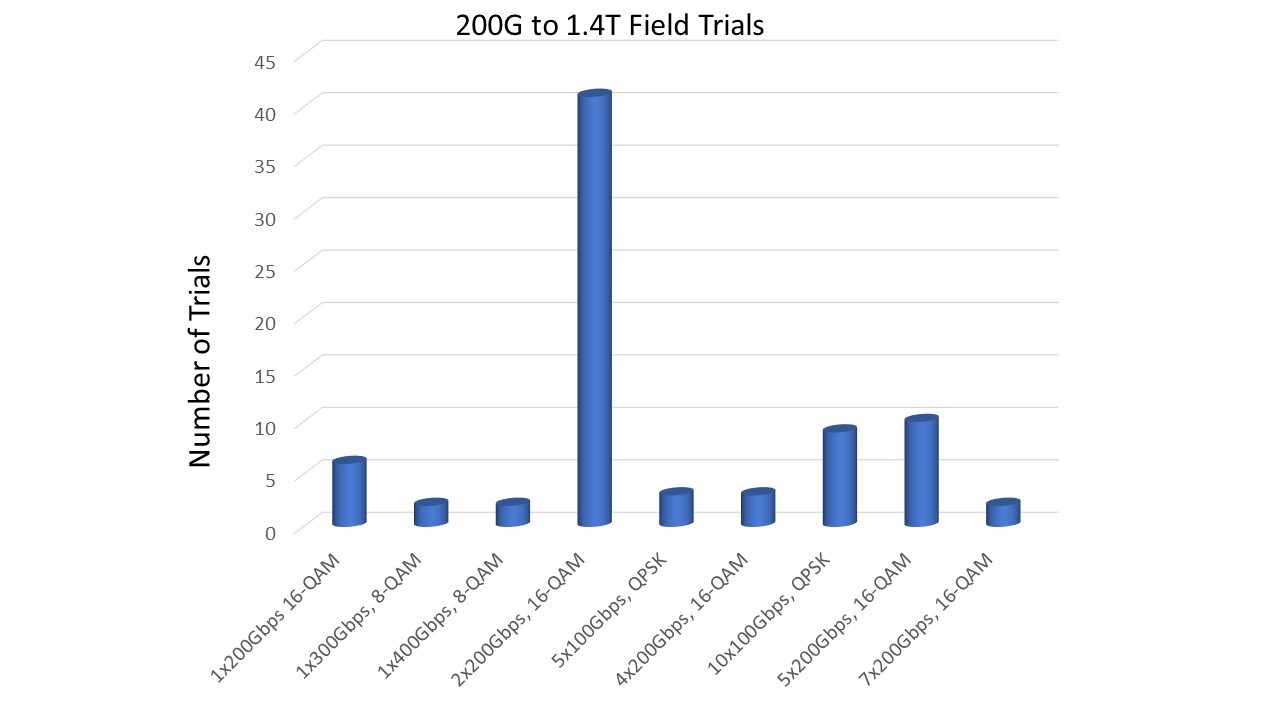 Over the past five years, many operators and service providers have been trialing 400G technologies on their live networks. In this article, we summarize findings from the review of over 80 trials throughout the world. The review focuses on operators, system vendors, technology options and reach achieved.

Internet traffic continues to approximately double every year driven by innovative digital applications, video streaming and other online activities.  Such historical data rate demands detected that the industry develop 400Gb/s systems and beyond for current and future bandwidth requirements. 100G coherent systems, which came across as an overkill when engineers first initiated their R&D, are now becoming widely deployed. Although many operators will upgrade their capacity by adding 100G DWDM channels to their networks, eventually it will cost less per bit deploying 400G compared to 4x100Gb/s DWDM, for example.

Evidence of the relevance of 400G is already starting to show as suppliers like CIENA are already shipping gear to some customers. According to Cignal AI’s forecast, both 100G and 400G coherent systems will be widely deployed at the edge of the network by the end of 2021.

By addressing 400G we are in no way suggesting that every network will have to migrate to 400G anytime soon. 10G DWDM systems will remain relevant in some networks for many years to come.  In some emerging markets, operators are only just starting to migrate from SDH systems to 10G DWDM systems. Others are planning to migrate from 10G to 100G which is expected to be more widely deployed over the years. Some will opt to use 100G and/or 400G in high traffic links and maintain 10G systems elsewhere. Some service providers who were expected to be early adopters of 400G are opting instead to migrate to 200G first.

400G and Other High Transmission Systems

In all deployed coherent 100G systems, polarization division multiplexed-quadrature phase shift keying (PDM-QPSK) modulation is used to improve the system spectral efficiency. Without a change in modulation format from 10G to 100G, 16x100Gb/s DWDM channels would consume the same spectrum as 160x10Gb/s DWDM channels, thereby defeating the whole purpose of migrating to higher data rates. By using QPSK in 100G systems over NRZ-OOK used in 10G systems, the spectral efficiency is improved form 0.2 bit/s/Hz to 2 bit/s/Hz over 50GHz DWDM spacing.

In migrating from 100G to 400G, spectral efficiency should also be improved. Quadrature amplitude modulation QAM in the form 2n-QAM, where n > 2 is the constellation order, is one option that is being used. Thus, modulation formats of 8-QAM, 16-QAM, 32-QAM… are being used in 400G and other transmission rates beyond 100G.

Unfortunately, these modulation schemes require more system optical signal to noise ratio (OSNR) and have a profound impact on the system reach because they are more prone to laser phase noise and fiber optic non-linearities. For example, a single carrier 16-QAM 400Gb/s signal over standard G.652 fiber with EDFAs and no Raman amplification could be limited in reach to only 200km. This does not meet the requirements for metro networks, let alone long-haul and ultra-long-haul networks. For a more detailed analysis, review the OIF article – Technology Options for 400G Implementation.

In order to evaluate the upgradeability of their fiber optic data transmission networks, many operators and service providers have been trialing 400G and other higher data rate systems on their live networks. We have reviewed over 80 of these trials with the aim of answering the following questions:

In most 400G implementations, superchannels and several modulation formats are being used. 2×200 Gb/s using 16-QAM modulation is mostly used for links and data center interconnects less than 500km in reach while 4x100Gb/s with QPSK modulation is used for longer reach. Similarly, 1T is implemented using 5x200Gb/s or 10x100Gb/s carriers.

Most leading vendors have partnered with one or more operators or service providers to successfully trial 400G or other higher data rates. Adva, Alcatel Lucent, CIENA, Coriant, Huawei and Infinera are some of the leading 400G system vendors.

All leading telecommunication operators, data center operators and IXPs throughout the world have trialed 400G and/or other higher data rate systems beyond 100G. The list of trials is provided in the table below.

Most technical concepts mentioned in this article are discussed in detail in the CONA and CONE optical networking classes.